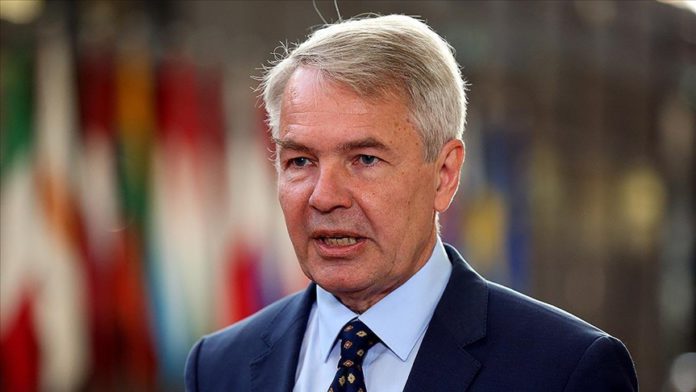 Amid Finland’s plans to join NATO, the country’s foreign minister on Friday avoided commenting on demands from alliance member Turkiye for an active stance against the PKK terror group.

His remarks came a day after Turkish President Recep Tayyip Erdogan voiced skepticism on Finland’s and Sweden’s membership applications and heavily criticized the two countries for tolerating extremists and far-left terror groups, including the PKK, which is also listed as a terror group by the EU.

Asked about Erdogan’s comments about their NATO bid, Haavisto expressed hope that they could overcome their differences with Turkiye on the issue.

Underlining that “each and every NATO country has the right to have their own opinions on the applicant countries,” the foreign minister noted that he had visited Turkiye twice this spring and held talks with his Turkish counterpart Mevlut Cavusoglu.

Haavisto said that he discussed this issue with Cavusoglu on Friday. “Probably, we’ll meet today here in the NATO meeting, as well,” he said, referring to Saturday’s informal foreign ministers meeting in Berlin.

Adding that they would continue to be in close dialogue, he said Finland is aware of the importance of fighting terrorism, for the safety of Europe and the world.

Both Finland and Sweden have signaled that they may submit simultaneous membership applications to NATO in the coming days.

However, he said Sweden and Finland were “openly supporting” and engaging with terrorist organizations like PKK and YPG, which continue to launch violent attacks targeting Turkish troops and civilians.

“That’s why the big majority of the Turkish people are against the membership of those countries who are supporting the PKK/YPG terrorist organization and they’re asking us to block this membership. But, these are the issues that we need to talk about with our NATO allies, as well as these countries,” he added.

In its more than 35-year terror campaign against Turkiye, the PKK — listed as a terrorist organization by Turkiye, the US, and the EU — has been responsible for the deaths of over 40,000 people, including women, children, and infants. The YPG is the PKK’s Syrian offshoot.