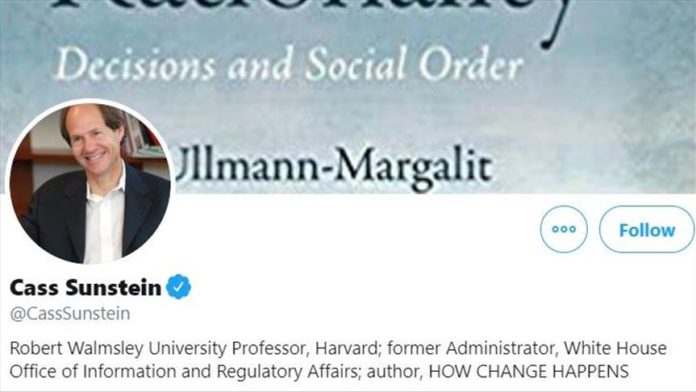 In the wake of the global coronavirus pandemic, many countries will focus more on hard scientific and economic evidence, perhaps especially behavioral science, according to Cass Sunstein, a distinguished American scholar at Harvard Law School.

Assessing how governments around the world benefitted from behavioral science in the fight against the outbreak, Sunstein told Anadolu Agency that the main lesson was that public health and safety are, first and foremost, issues of human behavior.

“And to know how to help, officials need to understand how people behave,” he argued.

Behavioral science incorporates insights from psychology about what motivates people to alter their behavior, a subject Sunstein has written books about.

“One thing is clear: Many governments are using this to encourage people to wear masks, to stay at home, to wash their hands and to maintain physical distance,” said Sunstein.

He added that many countries, including Germany, Denmark, France, New Zealand, and the US, have used such “nudges” as an essential part of their response to the virus.

Sunstein, along with Nobel Prize-winning economist Richard Thaler, pioneered the use of “nudge” as a technical term in their acclaimed 2008 bestseller of the same name.

In the book, they suggest that governments could do light-touch interventions to change people’s behavior for the better.

Despite this, governments often use mandates, bans and incentives to coerce their citizens – an approach that, according to Sunstein, does not always fully address human behavior.

As they emphasize in the book: “Nudges are not mandates. Putting fruit at eye level counts as a nudge. Banning junk food does not.”

The way Sweden used nudges to bring people to abide by social distancing measures during the pandemic may be one example of this.

Since the beginning of the outbreak, the Swedish government opted against strict measures so its citizens would not feel as if their freedom was restricted.

For instance, authorities in the southern city of Lund last month dumped 1,000 kilograms (2,205 pounds) of chicken manure in the city’s central park to prevent people from gathering for the traditional spring celebrations.

Eschewing strict lockdowns, Sweden has chosen a lighter-touch approach to stop the virus from spreading.

According to Sunstein, in many countries, these approaches work well.

He added, however, that it would be necessary to study many aspects of such responses to gauge whether countries made wise use of behavioral science.

Government-citizen relations in times of crisis

The difficulties associated with the pandemic have come down hard on society, with some resorting to panic buying, refusing to maintain physical distance, or even coughing on others as a means of assault.

Such incidents point to the apparent inclination of human nature to act poorly in the face of crisis.

Perhaps this is why academics like Sunstein and Thaler continue to stress that it is vital for governments to understand human nature when drawing up public policy, as such incidents are often related to a lack of cooperation between governments and the public.

In a 2016 article On the Intrinsic Value of Control, Sunstein and his co-authors lay out one aspect of human nature that may have affected the course of the pandemic.

“For most people, control has some intrinsic value; people care about maintaining it and will pay something to do so,” they write.

“Whenever a private or public institution blocks choices or interferes with agency, some people will rebel, even if exercising control would not result in material benefits or might produce material harms.”

The article helps explain why many have lashed out at the stay-at-home orders in the name of protecting their freedom, despite being aware of the (possibly deadly) consequences of doing so.

In preventing people from harming themselves and each other, Sunstein suggested that governments could use an assortment of “nudges,” such as simplifying policies and communications, as well as reminders, warnings and, particularly, the use of social norms.

Social norms, he said, are especially effective, as individuals are easily influenced by the behavior of others.

Some policymakers have highlighted current or emerging norms of behavior, with positive effects on compliance with physical distancing and mask usage guidelines.

We already know a lot about what works best and are learning more every day, he added, explaining that the best way to determine what is helpful and what is not is to keep careful track of current evidence.

Before COVID-19, interest mushroomed in behavioral science, and new findings are being used actively and extensively in many nations from the UK and Germany to the US, France, Japan, the UAE, India, and Saudi Arabia.

There is no question that we will see much more of this in the years to come, Sunstein underlined.

On psychological factors that will impact people’s economic decision-making in the post-virus era, he added: “Undoubtedly, many people will be careful, because they will want to save money, rather than to spend it, in an economically challenging time,

“A good nudge is to emphasize – when and if it’s true – that we’re getting back to normal, and the very best thing people can do, for themselves and their nation, is to live their lives as they did before.”