TurkishPress
Home News Fight against leprosy on back burner in India 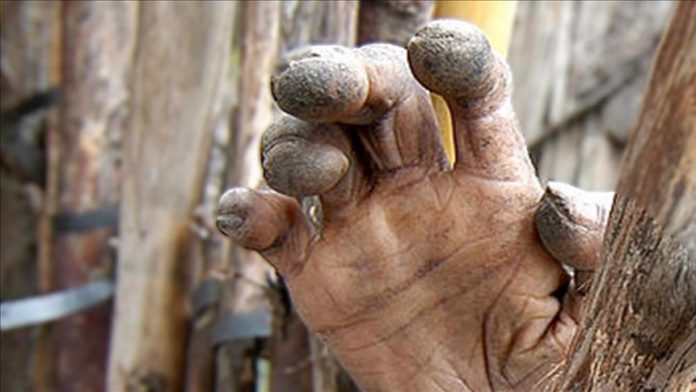 After being abandoned by his family for his diagnosis of leprosy, life for Anand Prakash became very difficult as society started treating him as an “untouchable” in Bhopal, a city in the central Indian state of Madhya Pradesh.

“Life for a leprosy patient is not easy. We have to beg for our survival. Although we have access to medicine and subsidized food, people mostly treat us as someone who is untouchable,” Anand Prakash, 52, who lives in a colony meant for leprosy patients in Bhopal, told Anadolu Agency.

Anand is estranged from his family, who abandoned after they became aware of his disease.

Though India accounts for almost 60% of leprosy cases in the world, the fight against the disease has been put on the back burner due to dwindling resources, experts believe.

Speaking to Anadolu Agency on the occasion of World Leprosy Day to be observed on Sunday, leprosy patient activist Prasant Kumar Naik said the disease was painless and that people consult a doctor only when they start losing nervous system function and face disability, which makes work difficult.

“Leprosy is a completely curable disease. But if ignored, affected persons face a high risk of disabilities and other medical complications,” said Naik, who heads the Lepra India, a non-governmental organization working to eradicating Leprosy.

Though the exact cause of the contagious disease continues to elude scientists, it is known be the result of infection by a bacteria called Mycobacterium leprae. Infection can occur at any age and symptoms can take anywhere from a few months to years to appear.

In 2005, leprosy was considered statistically eliminated in India and was dropped from the government’s health agenda, consequently drying up funds for efforts against the disease and making it difficult to run the program for its total eradication, said Naik.

He said that a majority of patients were from lower socio-economic groups of the community, making treatment even more challenging as they lack awareness and resources to fight the disease.

Dr. S N Pati, a senior doctor treating leprosy patients, told Anadolu Agency that people got infected “if they come into long contact with chronic patients,” while more than 95% of people today are immune.

Other officials in affected areas, such as Prabhuram Chaudhary, state health minister of Madhya Pradesh, have downplayed the challenges of facing the illness.

“We’ve maintained awareness about the disease in the state and have been successful in bringing the number of cases down. There is no shortage of funds for any disease,” said Chaudhary, speaking to Anadolu Agency.

Pati said early symptoms of leprosy are usually ignored and that when it progresses, the disease “gets complicated, and later on many complications, including disability, develop.”

He also noted that India has been facing a shortage of medical specialists on the illness.

“Leprosy is a special type of disease and requires expertise to diagnose. And, it’s not a part of the medical curriculum,” he said, adding that patients also require physiotherapy.

According to Pati, the states of Chhattisgarh and Orissa have a high prevalence of the disease.

Activist Prasant Naik said that though India lacks the manpower and resources to fight the disease, there are some positive signs. One is the declining stigma associated with the illness.

“Stigma is there, but it has reduced significantly in the last few years. It’s because of a massive reduction in the disfigurement of body parts. They (patients) were staying with their families.”

“I have visited various colonies, but I haven’t seen new inhabitants coming to these colonies in recent years. Massive awareness has created an atmosphere where people now have stopped sending the affected persons,” said Naik.