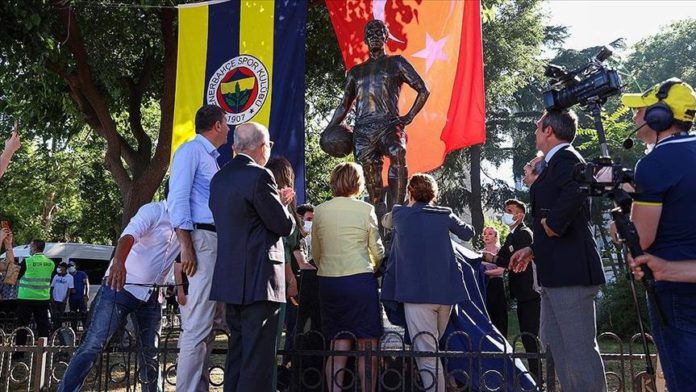 Turkish football club Fenerbahce unveiled a tribute Tuesday to one of its football legends.

In a statement on its website, it said a statue of Can Bartu was revealed at Kadikoy Yogurtcu Park in Istanbul.

Kadikoy is the club’s neighborhood and Yogurtcu Park is near Fenerbahce’s home ground, Ulker Stadium.

Fenerbahce President Ali Koc and several of the club’s executives along with Bartu’s spouse Guler and daughter Gulfer Arig as well as club fans attended the ceremony to pay tribute to the legendary football player.

Koc said at the ceremony that Can Bartu was a special person for the club due to his “exemplary character, nobleness, intelligence and gentlemanly behavior.”

He said there have been a few iconic athletes in Turkish sports history, but he is “unique” for Fenerbahce.

“Fortunately, he was a Fenerbahce player,” Koc added.

Considered one of the greatest talents in Turkish football, Bartu left his mark on the history of Fenerbahce and Turkey’s national team with his pure skills on the pitch.

Born on Jan. 30, 1936 in Istanbul, he began his sports career as a basketball player for Fenerbahce’s youth team and picked up five Turkish caps for the senior national team before switching to football.

On the pitch, he built an exceptional career during the 1960s, representing Turkish football abroad and playing for Italian football teams.

He made appearances for Fenerbahce’s football and basketball teams between 1955 and 1957 and even once played in matches of both branches on the same day.

Before moving to Italy’s Fiorentina in 1961, Bartu played for Fenerbahce’s football team for six years in his first term with the Istanbul club.

He joined Fiorentina and played for two more Italian teams, Venezia and Lazio, having an unusual career for any Turkish footballer outside the country during that time.

Bartu was nicknamed “Signor” (Mister) and became the first Turkish player appearing in a European cup final when Fiorentina played against Atletico Madrid in 1962.

He returned to Turkey in 1967 and played three seasons with Fenerbahce before ending his career in 1970.

Bartu scored 162 goals in 330 matches for the Yellow Canaries and scored six goals in 26 games for the national team.

Following his retirement, he worked as a sports writer and a football analyst for several television shows.

His outstanding talent was combined with a leadership on the pitch, making him a Fenerbahce legend. In 2009, Fenerbahce named the club’s training complex Fenerbahce Can Bartu Facilities to pay tribute to him.