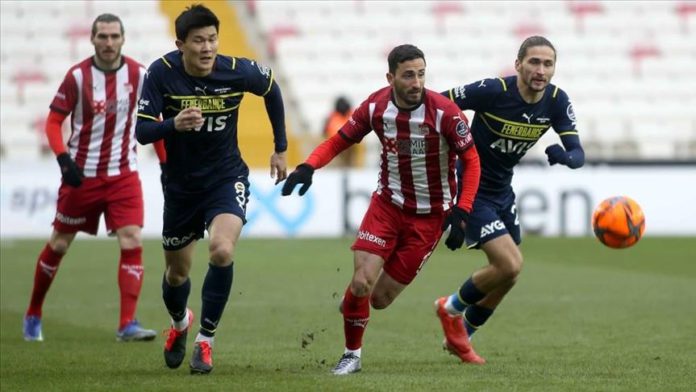 Fenerbahce on Saturday could not secure their lead in a Turkish Super Lig away match against Demir Grup Sivasspor as the match ended 1-1.

The Yellow Canaries took the lead on a quick counter attack in the 18th minute as their Slovenian midfielder Miha Zajc made a close range finish with his left foot after Enner Valencia’s pass near the six-yard box.

The early minutes of the second half saw a real scramble in the Fenerbahce area.

Sivasspor’s Sefa Yilmaz ran through Fenerbahce defense after a long ball, however Berke Ozer rushed to leave his goal as he cleared it. Olarenwaju Kayode took the control of the ball to attack, but Ozer was not still in his goal.

Some Fenerbahce players rushed to contain Kayode, but the Nigerian forward made a low shot that was saved by Ozer. Soon after Sivasspor’s Malian forward Mustapha Yatabare controlled the ball on loose to lob the ball at the far post. Fenerbahce defender Nazim Sangare was at the right place and headed the ball to corner.

In the minute 73, Sivasspor’s Yatabare unleashed a volley to hit the bar.

The ball hit the underside of the crossbar and then went inside.

In the 86th minute, Sivasspor hit the goalpost again. Ghanaian midfielder Isaac Cofie fired a powerful volley outside the area to rattle the bar.

They are now 14 points behind leaders Trabzonspor, who will visit Galatasaray in Istanbul on Sunday.

Sivasspor racked up 31 points to be in the ninth spot.

During the match, two Fenerbahce players were injured to go off the pitch.

After the game, Novak was said to have a “very serious injury” as Fenerbahce head coach confirmed.

“He (Novak) had a very serious injury as the doctor told me first. He cannot step on and walk. Perhaps his foot was put in a plaster cast … I hope he will heal and be back as immediate as possible,” Ismail Kartal told press.