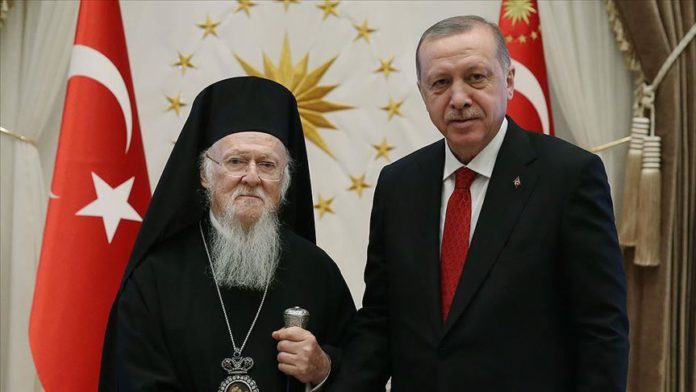 Fener Greek Patriarch Bartholomew on Tuesday thanked Turkish President Recep Tayyip Erdogan over the restoration of Sumela Monastery and its reopening to visit.

Turkey’s Communications Directorate said in a statement that Erdogan and Bartholomew talked over the phone.

Bartholomew expressed his gratitude to Erdogan for his support and interest in the restoration of the Sumela Monastery, the directorate added.

It said Bartholomew also congratulated the upcoming Muslim festival of Eid al-Adha of the Turkish and Islamic world.

On Tuesday, Erdogan reopened the country’s historic Sumela Monastery in the Black Sea province of Trabzon via video link.

Restoration works at the majestic monastery have been completed after landscaping, investigation, and strengthening of the geological and geotechnical maintenance of rocks were carried out at the monastic complex.

One of Turkey’s most important faith tourism centers, the monastery partly opened to visitors in May 2019 after more than three years of restoration efforts, which began in February 2016.

It reopened for religious use on Aug. 15, 2010 with the permission of the Culture and Tourism Ministry, following an 88-year hiatus.

The cliff-face monastery, which has drawn the attention of both locals and foreigners, hosts hundreds of thousands of sightseers every year.

According to the UN agency, its construction had begun in 385 A.D.