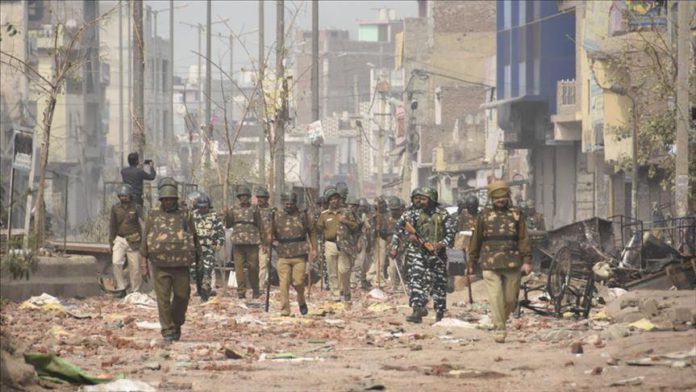 February’s riots in the Indian capital New Delhi were “well-planned,” said a fact-finding report by the Delhi Minorities Commission on Thursday.

In a report, the commission highlights that riots caused the displacement of a large number of Muslim families.

The communal riots, which turned violent, in northeast Delhi between Feb. 23 and 27 killed over 53 people, mostly Muslims, and injured over 250.

The report also documented that 11 mosques, five Muslim seminaries, one shrine, and one graveyard were attacked and damaged in the violence.

It also points out that the submission of charge sheets into complaints, without proper investigation, has created doubts over probe’s impartiality.

The report noted that violence erupted in various parts of northeast Delhi within hours of Feb. 23 “inflammatory” speech by Kapil Mishra, a politician affiliated with the ruling Bhartiya Janata Party (BJP).

On Feb 26, High Court asked Delhi Police to take a “conscious decision” to register a first information report (FIR) in 24 hours against Mishra, Anurag Thakur and Parvesh Verma for their speeches that led to incitement of violence.

To date, no FIR has been registered against the BJP leaders.

Speaking to Anadolu Agency, M.R. Shamshad, advocate-on-record, Supreme Court of India, who headed the 10-member fact-finding committee, said the whole narrative of the riots was changed by the police.

“Certain set of FIRs were prioritized causing a perception that Muslims instigated the riots. This would not have happened if the complaints from Muslim residents were also investigated without lapses, their complaints were mostly bypassed or delayed,” said Shamshad.

He further added that the victims, most of whom were Muslims, would have stood better served with fast justice and faster disbursement of monetary relief. In several areas of northeast Delhi, properties owned by Muslims were looted, burned, and destroyed.

The 130-page fact-finding report has been submitted to Delhi’s Lt. Governor Anil Baijal, and Chief Minister Arvind Kejriwal, who are yet to take any action.

The fact-finding committee has made its recommendations, asking the government to ensure proper and prompt registration of cases, ensure the recording of victims’ statements, and provide witness and victim protection, among many others.

Shamshad added that there is a lower-footing of such reports and it is has been sent for a wait.

“When Delhi Police has already stated in court that there is no role proved of Kapil Mishra and Parwesh Sahib Singh [BJP’s general secretary for Delhi State] then on what ground DMC [Delhi Minorities Commission] is saying this,” he said on Twitter.

August 10, 2020
We use cookies to ensure that we give you the best experience on our website. If you continue to use this site we will assume that you are happy with it.Ok