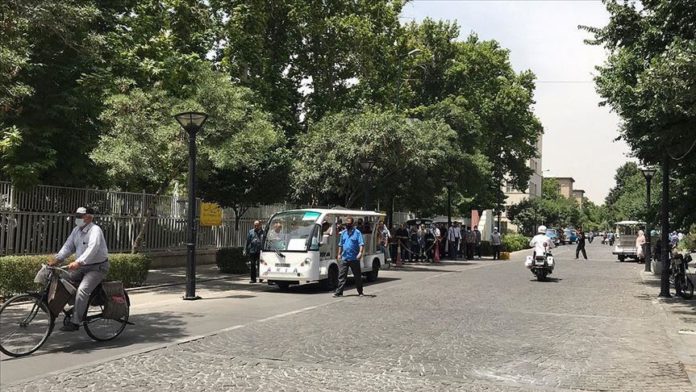 A surge in the numbers of coronavirus cases in Iran has reinforced fears of a second wave of the pandemic in the country.

This came one day after Iran crossed the 3,000 mark for the first time in over two months on Tuesday, with 3,117 infections and 64 deaths.

“Honestly speaking, it is scary and we don’t seem to fully comprehend the gravity of the situation,” Mohammad Taala, who works at a Tehran-based private university, told Anadolu Agency.

“At the time of its outbreak in Iran, we displayed same negligent attitude until the cases piled up,” he said. “Now when we have managed to contain the virus, we are taking a step back and letting it overwhelm us again.”

One of the first countries in the Middle East to be hit by the global pandemic in mid-February, Iran started to ease restrictions in April after a significant drop in new cases and deaths.

With public transport hitting roads again, mosques throwing their gates open and small businesses reopening, the country saw a surge in new cases again in May.

According to health experts, the case chart over the past few weeks shows signs of a second wave hitting the country.

In an effort to allay the fears of a second wave, Iranian authorities maintain that the new cases are confined to some high-risk provinces and the fatalities have dropped substantially.

But the country’s Health Ministry has already sounded the alarm bells, urging people to observe health advisories as the battle against the disease is far from over.

On Monday, Health Minister Saeed Namaki called on the Iranians to observe social distancing rules, warning that any negligence can prove costly and undo all hard work done over the past three months.

“People, have mercy on us (officials), let us have mercy on ourselves, government officials are getting tired,” he said in a passionate appeal.

Namaki said restrictions on traffic should be re-imposed in Tehran because “coronavirus is more dangerous than air pollution”.

Several hospitals in Tehran as Imam Khomeini Hospital and Masih Daneshvari Hospital have reported an increase in the number of incoming patients in recent weeks, adding to the burden of doctors and nurses.

“Those on the front line of this fight know what it takes to defeat this virus,” Shapouri, a nurse at Masih Daneshvari Hospital, told Anadolu Agency over the phone.

“We are pleading with people to wear masks and follow other advisories and we are also urging the authorities to not ease the lockdown so early.”

The new wave of COVID-19 cases has affected mostly southern parts of Iran, in particular the southwestern province of Khuzestan, according to Health Ministry officials.

Khuzestan, located on Iran’s border with Iraq, has been categorized as red or high-risk and is the only province where the government has moved to re-impose lockdown.

There has also been a spike in new infections in the southeastern province of Sistan-Baluchistan bordering Pakistan and Afghanistan and southern Hormozgan province facing Oman and the United Arab Emirates (UAE).

According to the Health Ministry, adherence to social distancing rules have dropped from 90 to 40% in major cities like Tehran, with most of the people using public transport without protective masks.

The Health Ministry, it appears, is not getting enough support from the government that has taken measures to ease restrictions despite the new surge in coronavirus cases and warnings from the ministry.

Last week, the head of Tehran coronavirus headquarters Alireza Zali expressed optimism that the pandemic was being “eradicated” in Iran, as over 88% of patients had recovered.

Iranian President Hassan Rouhani followed up by announcing new plans as part of measures to ease the lockdown, opening mosques, shopping malls and other businesses.

As per reports, around 40,000 mosques across the country were re-opened, beside major shrines in the cities of Qom, Mashhad and Tehran.

The authorities also allowed the weekly Friday prayers in over hundred cities and towns and lifted a ban on inter-city travel.

Pressure has been piling on the government to allow small and medium enterprises to reopen as the economy struggles under the US sanctions.

According to a report by Iranian Parliament’s research center, Iran’s per capita income dropped by 34% between 2011 and 2019. The corona lockdown has only made it worse.

Dr. Aseer Ali of Tehran Medical University warned that the spike in single-day cases from around 700 a month ago to above 3,000 now can dampen the spirit of people who feel the worst is over.

“It is bound to create fear and panic in the minds of people,” he said.

“Iran’s situation is not as bad as the US or some European countries, but the surge in new cases after having contained the disease is indeed a matter of concern.”