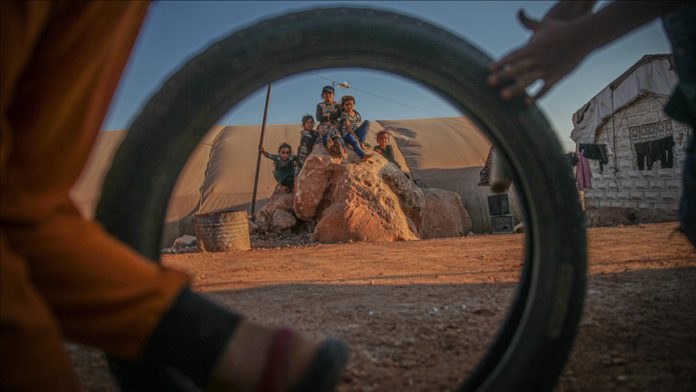 Civilians taking shelter in camps along the frontier between Turkey and northwestern Syria fear Russian efforts to shut down the Bab al-Hawa border crossing, which is of vital importance for civilians in the region.

Millions of civilians fleeing attacks by the Bashar al Assad regime and its supporters, are worried about the risk of starvation after Russian attempts to block aid entering the area through Bab al-Hawa, in line with UN Security Council resolutions.

Speaking to Anadolu Agency, Muhammad Ramadan, who fled to Tih camp following regime attacks on his village in southern Idlib province, said that Syrians wanted to live in safety like other human beings in other parts of the world.

“Closing the border gate, which is the life-blood of civilians, means starving civilians. People live safely in tents. We have something to eat with the aid we receive,” he said.

People in the area rely on the relief coming through Bab al-Hawa, Ramadan said. “Before we migrated, we used to live in our homes in peace and security. The Assad regime and Russia could not kill us with their guns, planes and artillery, but they want to kill us by closing the humanitarian aid doors.”

Another resident of Tih, Jamal al-Dairi, said Iran, Russia and the Assad regime massacred people and forced them to migrate and live in tents.

Dairi emphasized that Russia wants to close the Cilvegozu Border Gate — the Turkish side of Bab al-Hawa. He said: “They couldn’t kill the people with warplanes. They want to strangle 4.5 million civilians by closing the border gate.”

Calling on the UN to stop the gate’s closure, he emphasized that with no alternative, civilians in Idlib would be cut off from medicine and food.

Muhhane Ismael, who fled from the countryside of Hama further south and took shelter in the camp, said: “Russia wants civilians starve to death, as if it wasn’t enough to kill them by plane.”

“Civilians rely first on Allah and then on the humanitarian aid coming from the border. How will people live and how will they be treated when the doors are closed?,” Ismael asked.

Haisam Gajar, who took shelter in the camp, said that if the border gate is closed, civilians living in the tents will face starvation in an effective death sentence.

“We live in a mountainous area, we have no land to work on. We did not come here arbitrarily,” he said.

Gajar went on to say: “Russia made a habit of starving and forcibly displacing civilians. The world should not abandon civilians.”

“Rather than going to the areas controlled by the Assad regime, we prefer to struggle in the harsh living conditions in the summer and winter.”

Humanitarian aid has reached millions since 2014 through the UN Security Council-authorized cross-border mechanism in Idlib, which is home to thousands of internally-displaced people who have taken refuge there.

By 2020, international humanitarian aid such as food, medicine and medical supplies were sent through four border crossings.

The number of crossings was first reduced to two upon Russia’s veto and objections. In 2020, Russia only authorized Bab al-Hawa to be kept open for another year.

Dozens of non-governmental organizations operating in Syria voiced an appeal on Thursday opposing the closure of Bab al-Hawa between Turkey and Syria, the last lifeline for more than 4 million Syrians.