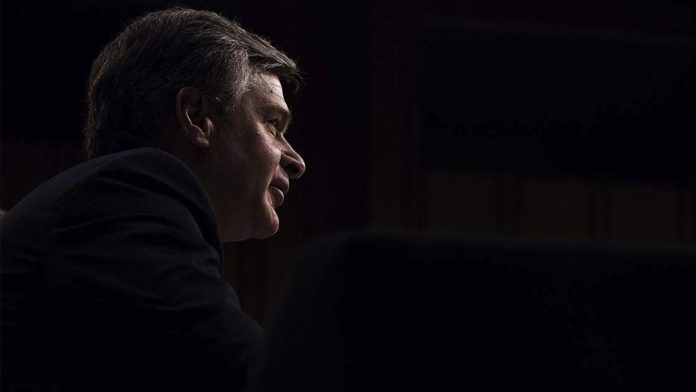 FBI Director Christopher Wray rejected conspiracy theories on Tuesday that suggest the fatal Jan. 6 assault on the US Capitol was a false-flag operation carried out by “fake Trump supporters.”

Asked about the allegations spread in some circles of former President Donald Trump’s supporters, Wray said federal investigators “have not seen evidence of that at this stage certainly.”

“We also have a couple of instances where we have already identified individuals involved in the criminal behavior who we would put in the racially-motivated violent extremists who advocate for what you would call ‘white supremacy,'” Wray said during his first testimony since the Capitol was overrun.

In describing the ongoing investigation into the fatal riot, Wray said Americans have sent in more than 270,000 pieces of digital media to help identify the perpetrators, including their friends and family members.

“We’re reviewing evidence, combing through digital media to identify, investigate and arrest anyone who broke the law that day,” he told lawmakers on the Senate Judiciary Committee. “Our greatest partner in this investigation has been the American people.”

More than 300 individuals have been so far arrested in on-going investigations by the FBI and local law enforcement agencies. That figure includes dozens of military veterans.

Five people died during the assault, including a Capitol Police officer. Two other law enforcement officers who were present took their lives in the aftermath.