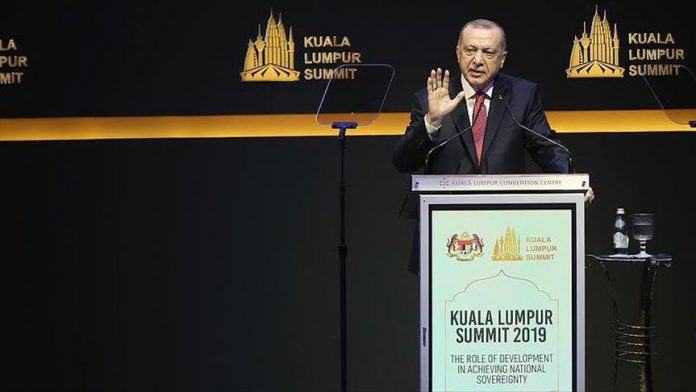 The fate of the world’s 1.7 billion Muslims is no longer in the hands of the five permanent members of the UN Security Council, Turkish President Recep Tayyip Erdogan said Thursday.

Speaking at the opening ceremony of the Kuala Lumpur Summit in the Malaysian capital, Erdogan reiterated that the world is bigger than five, referring to the five permanent UN Security Council members, whose veto power could prove catastrophic for smaller nations.

“The world is bigger than five” is a famous slogan repeatedly used by Erdogan to criticize the permanent council members — China, France, Russia, the

Read more: 'Fate of world's Muslims not in hands of 5 countries'

July 8, 2020
ADEN, Yemen  The Yemeni army announced Wednesday that it had downed an unmanned aerial vehicle in Al Hudaydah province.  The drone had been sent by Houthi...

July 8, 2020
ANKARA  The Turkish Republic of Northern Cyprus (TRNC) criticized the US on Wednesday for including Greek Cyprus in its International Military Education and Training Program. ...

July 8, 2020
ANKARA  Uruguayan star Luis Suarez helped Barcelona beat Espanyol in the Spanish La Liga on Wednesday with a 1-0 score.  Neither team managed to break the...

July 8, 2020
BAKU, Azerbaijan  Four members of Turkey's Coronavirus Scientific Advisory Board visited Azerbaijan on Wednesday to support the country's fight against the novel coronavirus.  They were welcomed...

July 8, 2020
PARIS France's newly appointed interior minister is in hot water after only three days on the job.   Gerald Darmanin is currently under investigation for a complaint...