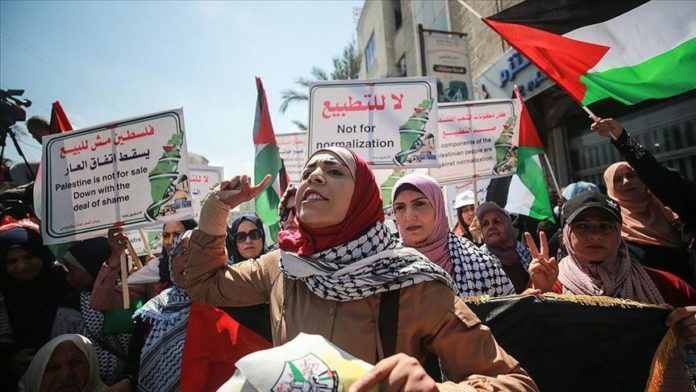 Palestine’s top political groups Fatah and Hamas on Wednesday slammed the UAE-Israel deal as a “stab in the back and an obliteration of the [Palestinian] cause.”

Hundreds of Palestinians attended in a public rally where figures from the two main groups reaffirmed their opposition to the UAE’s move to normalize ties with Israel.

Palestinian Prime Minister Mohammad Shtayyeh said “the Emirati move is a painful stab and a flagrant violation of the Arab Peace Initiative.”

He pointed out that Palestinians were still facing the challenge of achieving unity, saying that “the Palestinian resistance is the common tool to confront the [Israeli] occupation.”

On Tuesday, President Mahmoud Abbas met representatives of Palestinian groups in Ramallah to discuss the repercussions of the UAE-Israel agreement.

Hassan Yousef, a prominent Hamas leader in the occupied West Bank, said that Palestinians would not allow anyone to “violate our rights, lands, and holy sites.”

Wasel Abu Yousef, member of the Palestine Liberation Organization’s executive committee, reiterated that the Palestinian people will always reject any deal that takes away their rights.

“The recent UAE step hurts the struggle of our people – it is a treasonous move that betrays our cause and holy sites.”

The deal between Israel and the UAE was announced by US President Donald Trump last week.

It made the UAE the first Gulf state and third Arab nation, after Egypt and Jordan, to establish full diplomatic relations with Israel.

'There are no genocides, massacres in history of Turkish nation'