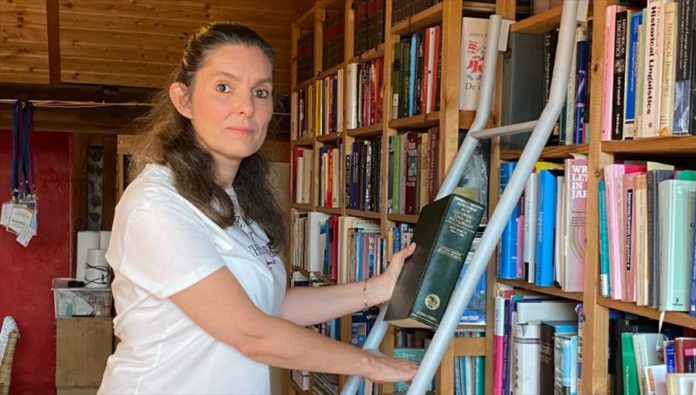 “What I find interesting in Turkology and the studies of Turkic languages from the historical perspective is that the Turkic languages have been so mobile in history,” said Martine Robbeets, Archaeolinguistic Research Group Leader at Germany-based Max-Planck-Institute.

In an interview with the Anadolu Agency after the group published its research that found the origins of ‘Transeurasian’ languages are traced to Neolithic millet farmers, the professor said the first written sources of Turkic inscriptions are found in the Orkhon Valley of Mongolia.

“There we find the very first inscriptions, by accounts going back to the eighth century, and then in less than 2000 years, you see Turkic spreading all across Eurasia, from the East, all to the West,” said Martine. Her research and experience in languages have expanded beyond 20 years.

Orkhon valley sprawls along the banks of the Orkhon River in Central Mongolia, some 320 km west of the capital Ulaanbaatar.

“It’s fascinating to see how the Turkic languages have been so mobile over the last millennia. And, of course, that’s also partly due to horse-ridden pastoralism. And that’s what I think is really fascinating about Turkic,” she added.

The linguist, who has studied Japanese and Korean, said: “then we find the split between Japan Koreanic and what we call Altaic – Altaic is the unity of Turkic, Mongolic and Tungusic. And then you see that very early on about 6800 years ago, we see the Turkic languages splitting off, and only around the turn of this era, the Turkic languages started to split and to disperse across Asia.”

“And then they split in Altaic and Koreanic and from this Altaic group to Turkic languages were the first to split off and to go over the eastern steppe,” she added.

The researchers found speakers of proto Transeurasian of this ancestral language situated in the Liao River valley basin in northeast China.

The Archaeolinguistic Research Group, which consists of linguists, archeologists and geneticists, in their research published by Nature magazine, traced the origins of modern Japanese, Korean, Turkish and Mongolian – part of 98-member Transeurasian languages — and the people who speak them to millet farmers who lived in north-eastern China some 9,000 years ago.

The Transeurasian languages are spread in parts of Europe, Anatolia, Central Asia and Siberia.

The professor said the question of whether the languages have a common ancestor is “disputed and most debated.”

“This question of common ancestry is not universally accepted. It’s a very debated topic. Whether Turkic is related to Japanese is one of the most disputed issues of historical-comparative linguistics. The main objections are that there is not enough basic vocabulary; that there are no sound correspondences, that there is no common morphology, and that the similarities can be explained by borrowing,” she explained.

The professor, during her research, investigated the vocabulary, and etymologies relating Turkic basic words to Japanese and other Transeurasian languages.

“I found that there were regular sound correspondences between the different forms and that there were even like little building stones in words like causative passive, normalizer, grammatical markers that corresponded and then in the end, even if there are a lot of the similarities between Turkic, Mongolic, Tungusic, Korean and Japanese (it) can be attributed to borrowing to horizontal transmission. They’re still some proof there. There’s a small core of reliable evidence that shows us that Turkic and Japanese and other languages have descended from one common ancestral language,” she said, adding, “that was my work, say over the last 20 years.”

The professor, however, said this work could be done by linguists alone.

“For these questions, we need to rely on other disciplines like archaeology and genetics, and that is why the key objective of this Archaeolinguistic Research Group is to integrate archaeology, linguistics and genetics in one single approach, and we call this approach triangulation,” she said.

Accepting this unity, say of Turkic and Japanese and the old languages in between accepting Transeurasian unity, the professor said, “gives rise to new questions: such as who were these ancestral speakers of proto Transeurasian? Where did these people live? And when did they live? And why did they move to their present-day locations? Why did they spread all across Eurasia, and these questions cannot be addressed using linguistics alone.”

The linguist said powerful nations like Japan, South Korea and China like to “picture themselves as having one people, one culture and one language.”

“But the truth that makes many people with nationalistic agendas and calls uncomfortable is that all languages, all cultures, and all people, including those in Asia, are mixed,” she said.

“Linguistics can also show us that not only all people but all cultures, but also all languages are mixed. They can make feel people with nationalistic agendas a bit more uncomfortable,” she added.

“We included contemporary varieties… But we also included historical varieties like old Japanese, Middle Mongolian, old Turkic, middle Turkic and so on. So, and for all these languages, we collected basic vocabulary and agropastoral vocabulary — vocabulary relating to agriculture,” she said.

“We tried to develop a tree using computational methods, and we found a tree for Transeurasian. And this tree says that the first separation in our trans-Eurasian family lies at 9000 years ago,” she explained.

“And then we find the split between Japan-o-Koreanic, and what we call Altaic. Altaic is the unity of Turkic, Mongolic and Tungusic.”

She said her team later worked to find a place, a location for this ancestral Transeurasian family.

“And we found that speakers of proto Transeurasian of this ancestral language were situated in the West Liao River valley basin in northeast China. And then they split in Altaic and Koreanic and from this Altaic group to Turkic languages were the first to split off and to go over the eastern steppe,” the research found.

“Later on, it had other splits like Koreanic and Tungusic and ultimately Japanic.”

The team also worked to find about the speakers of these Transeurasian languages.

“The only thing we can do is apply a linguistic method, that is historical linguistic comparison, so we compare present-day forms in the different languages, we look for the similarities, and we try to unwind these regular similarities to [in] one ancestral form, that’s kind of the linguistic technique we use for that,” she added.