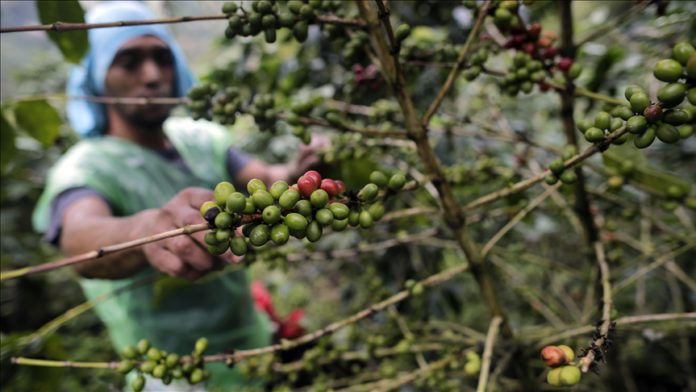 “A few years ago, I was a miserable coffee farmer who did not earn much from my coffee plantation. But now, after learning how to boost production, I’m very successful,” said Masaba in an interview.

“To boost my coffee output, I introduced bees to my plantation. I copied this (technique) from farmers in the central region of Buganda,” he told Anadolu Agency, referring to a kingdom in southeastern Uganda.

Masaba said he decided to introduce bees to his crop three years ago, after a visit to a friend and fellow coffee farmer in this region who was employing the same method and reaping the benefits in the form of plentiful harvests.

During his visit, his host explained to Masaba that the bees he kept on his farm helped pollinate the coffee plants, so boosting their yield.

In the central district of Kayunga, another apiculturist coffee farmer, Alex Mulwanyi, told Anadolu Agency that before he started keeping his bees, his 20 acres (8 hectares) of coffee plantation only produced 6,800 kilograms (about 15,000 pounds) of dry coffee in a year, falling to half this amount after factory processing.

“Thanks to the many bees on my coffee farm, my coffee plants are well-pollinated, and all my berries have coffee seeds in them.”

Over the past several years, many coffee farmers have adopted this technique, with most of those interviewed by Anadolu saying that to increase their harvest, they kept many hives on each of their farms.

Edward Nanyole, a coffee farmer in the Bugiri district, said he had 100 colonized hives on his 30 acres of plantation. Apart from these colonized hives, he said there were also other beehives on the branches of the surrounding trees.

“Apart from boosting my coffee production, I also earn from the honey,” said Nanyole, adding that his bees brought in over 300,000 Ugandan shillings ($85) per month.

“With the bees, I hit two birds with one stone. They help me get more coffee and I also make money from selling the honey they make.”

Agricultural official Benon Oundo said that in the past, coffee farmers in the East African country were left befuddled every year at the steady decline in their harvest — even when they added more land to their plantations.

“When we conducted a study, we realized that pollination was low due to environmental degradation,” he said, pointing to the rising human population and destruction of forests, eradicating the vital insects’ habitats and rendering them unable to pollinate the surrounding plants — including the farmers’ coffee.

Oundo added that this study, carried out by National Agricultural Research Organization (NARO), found that the scarcity of bees was the cause of the poor pollination.

“We advised the farmers to start keeping bees on their coffee farms so they could increase the pollination of their plants. A good number of them took the advice and indeed, they started reaping big,” said the official.

He added that the research was carried out by a team led by Patrice Kasangaki, the head of the apiculture research at NARO.

Bees on a coffee plantation, according to Kasangaki, not only increase the quantity of the seeds produced but also make for a sweeter cup of coffee for the drinker, benefiting both producer and consumer.

Pakistan, Azerbaijan agree to stand behind each other

Zimbabwe: Farmers find ways to save crops from elephants