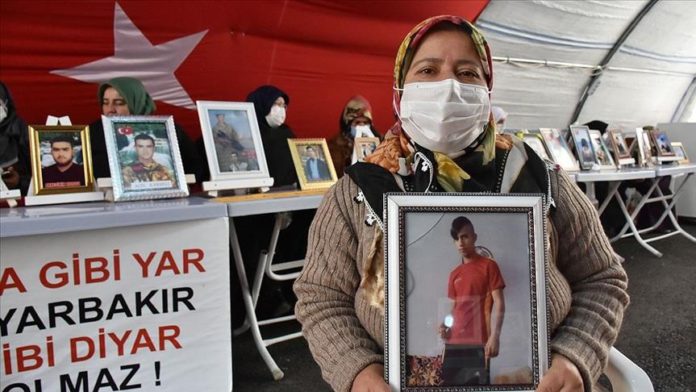 One day in 2014 during the Muslim holy month of Ramadan in Turkey’s southeastern Siirt province, Saadet Odumlu was planning to cook for her family and enjoy their company while breaking her fast.

But then she heard the news that her underage son was tricked into joining the YPG, a Syrian offshoot of the PKK terror group.

She said the “darkest day” of her life was that day when the family lost their peace of mind, and she has not been able to smile for the past seven years, worried over her son’s fate.

Fearing he may lose his life, she joined a sit-in protest against the PKK/YPG in the southeastern Diyarbakir province of Turkey.

The protest is being staged outside the office of the Peoples’ Democratic Party (HDP), which the government accuses of having links to the YPG/PKK. It began on Sept. 3, 2019, when three mothers said YPG/PKK terrorists had forcibly recruited their children.

“Seven years [since the abduction of my son] will have passed in a month. My son was 15 years old [when] they tricked him. They took him, particularly because my husband is a village guard.

“A year later, he called me and said he was in Kobani [or Ayn al-Arab in Syria]. He has not called since then. I’ve never heard from him ever since,” Odumlu told Anadolu Agency.

The disappearance of Yusuf inflicted a heavy blow on their lives, according to Odumlu, who said her family lost its joy and has never recovered since then.

“Our life is ruined. We have no peace. We cannot sleep, none of us [her family],” she said, adding she did not even cook certain dishes, as they reminded her of her son.

“My son had dreams. He did not go to school, but he was a very compassionate, smart, and well-behaved kid,” she said, noting the family was greatly concerned over Yusuf’s well-being.

At least 24 sons and daughters of the protesting families have so far reunited with their families after surrendering to Turkish authorities, and watching this happen on TV became a source of inspiration for Odumlu, prompting her to take part in the protest.

“I want to hug my child. For seven years, we haven’t been able to sleep or eat [properly] or have peace. The food we eat feels like poison. Twenty-four of our children [of sit-in families] have returned. God willing, all our children will come back,” she said.

Odumlu also cursed the YPG/PKK terror group, accusing it of forcibly recruiting underage children as young as eight to carry out its agenda while destroying their families, leaving thousands of mothers in tears.

She also noted that she was determined to be part of the protest until her son was brought back, dead or alive, and the families’ protest could perhaps lead to the rescue of children who were abducted during childhood, indoctrinated, and raised to operate within the terror group.