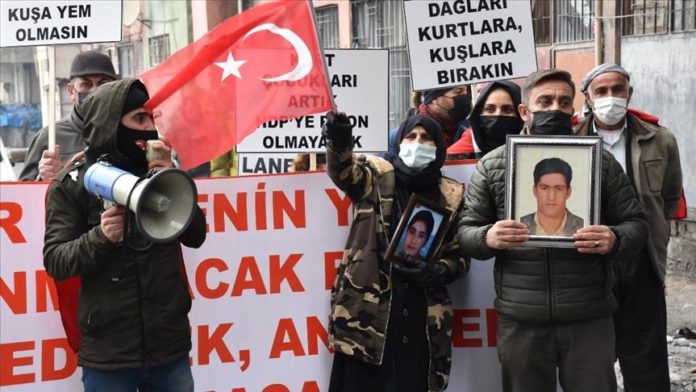 Families suffering from a bloody four-decade PKK terror campaign staged a protest on Friday in Turkey’s southeastern province of Hakkari.

Families victimized by the terror group have gathered at the Cumhuriyet Square every Friday for the last three weeks.

With Turkish flags and pictures of their abducted children in their hands, they marched in front of the provincial headquarters of the Peoples’ Democratic Party (HDP). The political party is accused by the government of having links to the YPG/PKK terror group.

“Come on, don’t be scared. Let’s take our children off the mountain together. We believe we will save our offspring who are in the hands of the terrorist organizations, thanks to mothers who have been raising their voices with determination,” she added.

Ciftci urged all people in Turkey “to see the real face of the PKK” and wanted back their children from HDP.

“The PKK will lose, and mothers will win. We call upon everyone, whose hearts and thoughts are with us, to join us. Let’s carry on this rightful cause together,” she said.

“We will never give up. We won’t leave until we free those children from your clutches. Our just cause will not be destroyed in the face of any lies, slander, and cruelty,” she added.

Another protest outside the office of HDP in the southeastern Diyarbakir province began Sept. 3, 2019, when three mothers said PKK terrorists forcibly recruited their children.

In its more than 30-year terror campaign against Turkey, the PKK — listed as a terrorist organization by Turkey, the US, and EU — has been responsible for the deaths of 40,000 people including women, children, and infants. The YPG is the PKK’s Syrian offshoot.