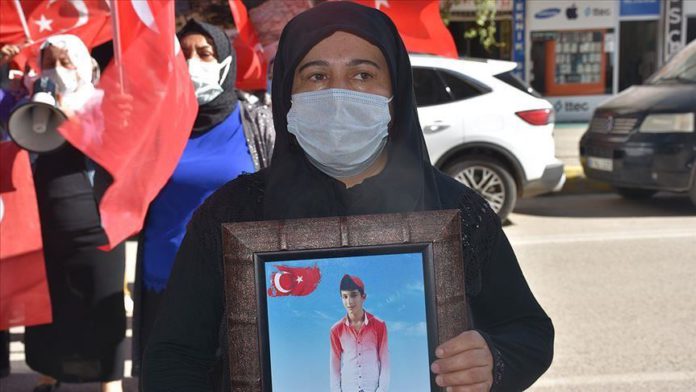 Families whose loved ones were abducted or killed by the PKK terror group, staged a demonstration Thursday in southeastern province of Sirnak.

Women of Sirnak, families and veterans of Turkey’s war on terror marched against the terror group before they gathered in front of the provincial headquarters of the People’s Democratic Party (HDP), which is accused of having links to the YPG/PKK terror organization.

Demonstrators chanted anti-PKK slogans, including “Women of Sirnak call terrorists to account,” and “Martyrs are immortal our land is indivisible” as they carried pictures of family members and victims of the PKK violence.

Hamdiye Aslan, whose 14-year-old son was abducted by terrorists five years ago, said demonstrators are determined to continue protesting every week to demand the return of their children from the HDP.

“How would they have gone if the HDP had not guided them? We want our children from the HDP. We know that our children were brought to the mountains by the PKK. We are suffering great hardship,” she said.

Zubeyde Bilir, whose husband and big brother were massacred by the PKK 11 years ago, said she was participating to support mothers whose children were kidnapped by the terror group.

“Nothing is more natural than mothers asking for their children from the HDP. We will continue the protest until the children come back, not seven weeks, even if seven thousand weeks pass. HDP will pay the price,” said Bilir.

Demonstrators condemned the PKK and the HDP and expressed support for Turkey’s anti-terror operations.

EU recovery plan to be presented in a month