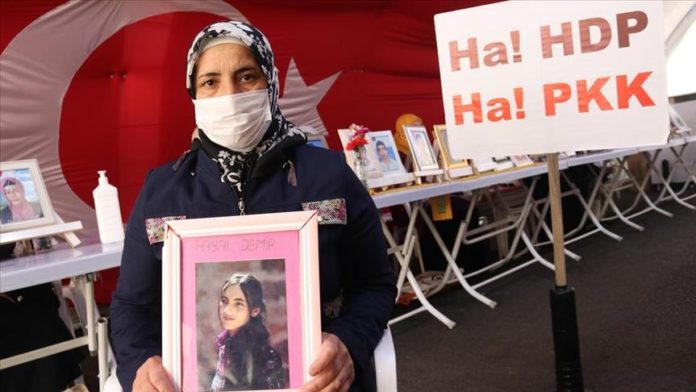 Families of children abducted or forcibly recruited by the PKK terror group continue their sit-in protest in Turkey’s southeastern Diyarbakir province on the 566th day.

The protest began on Sept. 3, 2019, when three mothers said their children had been forcibly recruited by PKK terrorists. The sit-in outside the offices of the Peoples’ Democratic Party (HDP), which the government accuses of having links to the PKK, has been growing since then in Diyarbakir province.

Suheyla Demir joined the protest along with her younger daughter as her another daughter had been abducted by the terrorists.

“Let us have our children back from the HDP and PKK. I am waiting for my child,” she said, adding she would not leave the protest until her daughter returns home.

Sevket Bingol, a protesting father, accused the HDP of using Kurdish people for its political gains and noted that the party helps abduct their children and abandon them to death in the mountains.

Bingol called on his son, Tuncay, to flee the terror group and surrender to Turkish security forces.