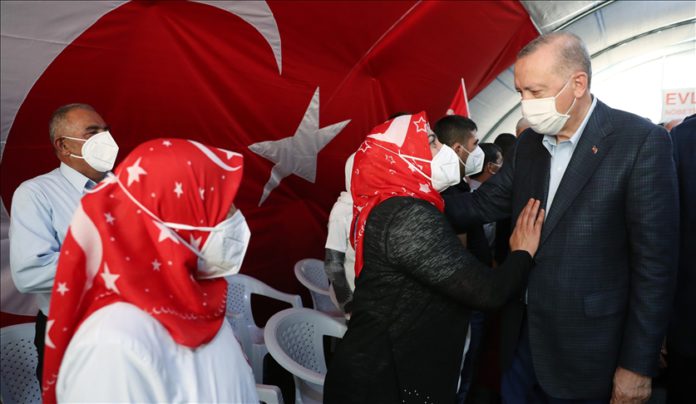 A member of local families that have been protesting the PKK terrorist organization since September 2019 in Turkey’s southeastern Diyarbakir province told the Turkish president that they feel empowered, expressing gratitude.

Turkey’s Communications Director Fahrettin Altun released a video footage on Twitter from Friday’s visit of President Recep Tayyip Erdogan to the local families who have been protesting the PKK since September 2019, encouraging their children that were deceived into the PKK service to give up their weapons and surrender to Turkish authorities.

“If we had seen this power 30 years ago, perhaps so many mothers would not be crying in Turkey like today. Today, we feel empowered to do this, thanks to you,” Turkan Mutlu tells Erdogan in the footage. Mutlu said her daughter Ceylan was abducted by the PKK eight years ago, claiming that the opposition Peoples’ Democratic Party (HDP) was directly involved in the abduction.

Reminding an HDP deputy’s words that described mothers as “shedding crocodile tears,” Mutlu said she is a mother, and now deprived of her right to see her daughter even for a minute, adding that she even does not know if Ceylan is dead or alive, or where she is at all.

“My Ceylan was graceful as a gazelle. Rescue her and the children of all mothers from those oppressors. Do not let her be a servant to them,” she added, mentioning that she has lost her health as she even cannot stand on foot for more than 10 minutes.

The protests outside the offices of the HDP in Diyarbakir started with three mothers who said their children had been forcibly recruited by the terrorists. The Turkish government says the HDP has links to the PKK terror group, and prosecutors have filed suit with the nation’s highest court to shut the party down.

In its more than 35-year terror campaign against Turkey, the PKK — listed as a terrorist organization by Turkey, the US, and EU — has been responsible for the deaths of at least 40,000 people, including women, children, and infants.