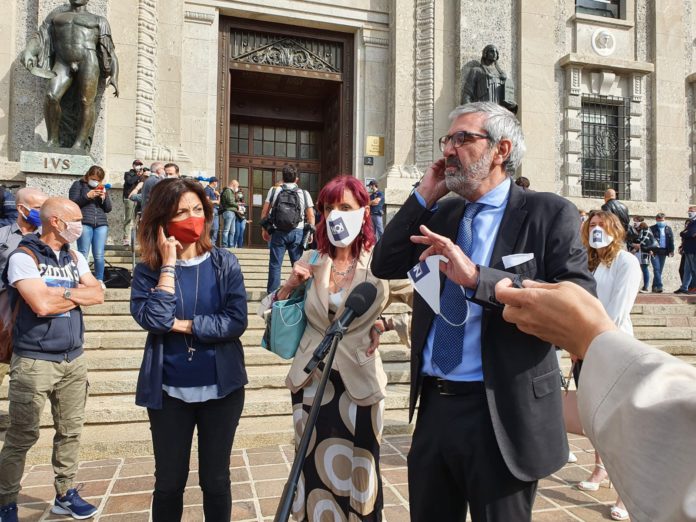 Dozens of grieving relatives of coronavirus’ victims on Wednesday filed their complaints at the prosecutors’ offices in Italy’s northern city of Bergamo, denouncing serious failures by local politicians and health officials in handling the pandemic.

The initiative, organized by the legal committee “Noi Denunceremo” (We will report), is the first step of a long legal battle that the families of the victims intend to fight in the name of their relatives, who – according to their complaints — died without receiving adequate assistance.

On Wednesday, about 50 complaints out of the 200 already prepared, were filed, organizers said.

Bergamo in the northern Lombardy region has been the worst-hit city by the pandemic globally, reporting over 13,600 coronavirus cases and more than 3,000 deaths, according to official data.

Many of the victims died alone in local hospitals and clinics, which were overwhelmed with COVID-19 cases and struggled with lack of space and ventilators in intensive care units.

The families denounced the failure in preventing the spread of the virus in the very early stages of the emergency, when the hard-hit areas surrounding the cities of Bergamo and Brescia were not declared “red zones.” They also highlighted responsibilities by local and central authorities in responding to the crisis, but are now asking Bergamo prosecutors to identify specific charges.

Luca Fusco, the committee’s president, recalls how the initiative started spontaneously, following the death of his father from COVID-19, when he created a Facebook page dedicated to the families of the victims.

“Our only constraint is time, as our lawyers are working on a voluntary basis. But we’ll dig until the very bottom of this story,” he added.

Monica Piazzoli has lost her 66-year-old husband due to the pandemic. He was hospitalized in Bergamo’s Papa Giovanni hospital, considered one of the best in the area.

“They called me saying he would die in a few hours, but then it happened in just 10 minutes. I didn’t have the time to say goodbye,” Piazzoli said, adding: “He was deprived of his human rights.”

Piazzoli stressed she is not asking for financial compensation for her husband’s death, but only for justice.

“We want that those who made enormous mistakes admit their responsibilities. But we’re not accusing doctors and nurses, they were victims as well,” she said.