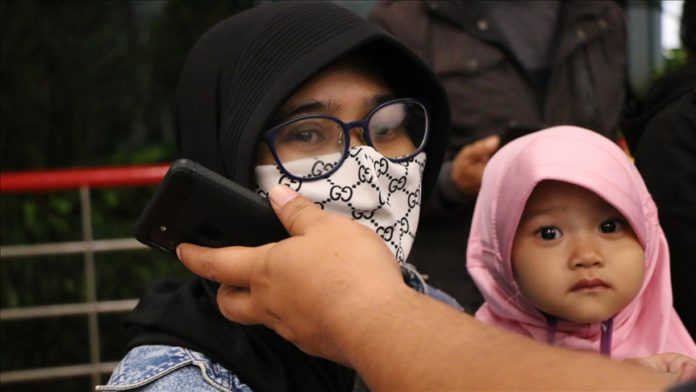 The relatives of victims of the Indonesian passenger plane, which crashed into the sea five minutes after the takeoff on Saturday, are waiting at the airport to hear about their beloved ones.

Waiting at the Soekarno–Hatta International Airport, Arya Karisma Hardy, a victim’s relative, told Anadolu Agency that Mulyadi Mulyadi, among the passengers aboard the plane, was his close friend.

“He just got married. Mulyadi was aboard the plane with four other people including his wife, mother-in-law, and other relatives,” he added.

Hardy said that he came to the airport to get information after learning that the plane crashed. “I learnt that he was on this plane from his social media post. Crisis desk officials also confirmed that Mulyadi and his relatives were on the plane.”

Living in the capital Jakarta, Mulyadi got on the plane to go to his hometown Pontianak in the West Kalimantan province to see his family, Hardy said, adding he wanted to get good news as soon as possible.

Another victim relative was Sri Rahayu who had five relatives on board: “They were going to fly on Sunday, but when their plans changed, they were able to fly on Saturday. When I saw the news on TV, I tried to reach them all but their phones were off.”

The relatives of the passengers are waiting in a special area set up at the airport, however, press members are not allowed to enter.

The Indonesian passenger aircraft with 62 people on board crashed into the sea on Saturday after taking off from the capital Jakarta.

The plane had 50 passengers on board, including 10 children, plus 12 crew members, according to authorities.

The Indonesian Navy said it found the debris of aircraft scattered at four sites of Thousand Islands waters.

The Indonesian Red Cross said it prepared 100 volunteers and equipment for the evacuation of plane crash victims.

Turkey tells EU to refrain from repeating past mistakes