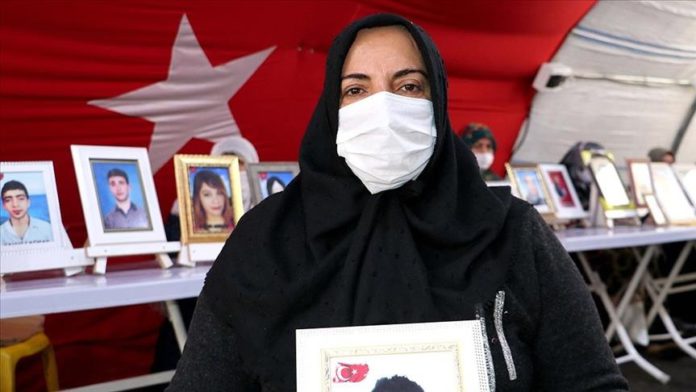 Families in Turkey whose children had been abducted or forcibly recruited by the PKK terrorist organization continued on Tuesday their sit-in protest in the southeastern Diyarbakir province on its 589th day.

The protest began on Sept. 3, 2019, when three mothers said their children had been forcibly recruited by PKK terrorists. The sit-in outside the offices of the Peoples’ Democratic Party (HDP), which the government accuses of having links to the PKK, has been growing since then in Diyarbakir.

Sultan Guger said she has not seen her son, Dogan, since he was abducted by the terror group six years ago.

“I’m at the door of the HDP building. I want them to give me back my son. I’m not leaving this place until my son arrives,” said Guger.

She called on Dogan to surrender to security forces as soon as possible.

Necmettin Bicer said he was protesting for the return of his daughter, Gulcan.

“My daughter was abducted by the HDP and was given to the PKK. I’ll be here for her until the end,” vowed Bicer.

“It’s not about my daughter alone. It’s about the future of our country,” he continued.

Bicer, too, called his daughter to surrender. “Come and surrender, my daughter. Surrender yourself to the supreme Turkish justice. Don’t be afraid, don’t hesitate.

6 months on, WHO chief says COVID-19 is far from over