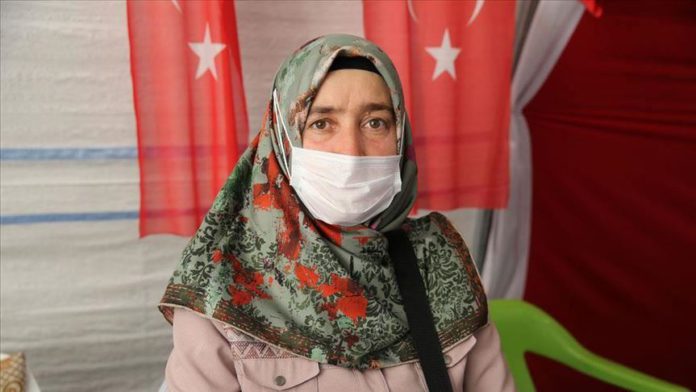 A protest in southeastern Turkey against the YPG/PKK terror group entered its 341st day on Saturday, with parents demanding the return of their children they say have been kidnapped by the terrorists.

Protesters camped outside the offices of the opposition Peoples’ Democratic Party (HDP) in Diyarbakir province have vowed to stay put until the return of every child.

The protest outside the offices of the HDP, a party accused by Ankara of having links to the YPG/PKK terror group, was started last September by three mothers – Fevziye Cetinkaya, Remziye Akkoyun, and Aysegul Bicer.

They, along with the dozens of more families that have joined the demonstration until now, accuse the terror group of forcibly recruiting their children.

One of the aggrieved parents, Hatice Ay, said she has not heard from her son since he was abducted by the terror group five years ago, when he was just 16.

She said it was the HDP that sent her son to the YPG/PKK terror group and vowed to remain outside the party’s offices until his safe return.

Sevket Bingol, a father, also blamed the HDP for the kidnapping of his son six years ago.

He said losing his child was the most painful experience of his life, and urged his son to surrender to Turkish security forces.

Bingol accused the YPG/PKK terror group of exploiting the Kurdish people for 40 years.

Another father Fahrettin Akkus said his son was deceived by the HDP and handed over to the terror group.

“My son, if you find a way to escape, just run away. HDP deceived you; please run away my son,” he said.

*The YPG is the PKK’s Syrian offshoot

UN reports on brutality of Syrian war on children

Top envoys of Japan, US, India, Australia meet in Tokyo