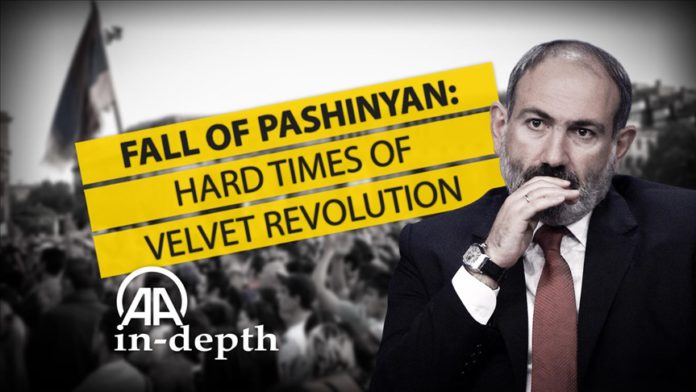 Fresh clashes between Azerbaijan and Armenia that started on Sept. 27 in the Nagorno-Karabakh region recently ended with a cease-fire.

While joy has gripped Azerbaijan since the end of the years-long occupation, there has been anger and sadness on the Armenian side.

A group of Armenian demonstrators, who saw the agreement as a great defeat, broke and entered through the windows of the government building and raided the parliament. As the protests continue in the capital Yerevan, Pashinyan has been called to resign.

Claiming that they had no choice but to accept the cease-fire in his address to the nation, Pashinyan is going through the hardest days of his political career.

In 2018, Pashinyan rose to prominence as the leader of widespread demonstrations across the country against the political establishment, demanding a more democratic Armenia and an end to corruption.

Nikol Pashinyan was elected as prime minister by the parliament after the bloc he led received 70.4% of the votes in the elections held in December 2018.

Pashinyan had promised that he would not make the mistakes of previous administrations, stating that he would be determined to fight against chronic corruption and make Armenia a more transparent country.

However, some have argued that he has committed his predecessors’ mistakes, failing to realize the reforms he promised.

Anadolu Agency bears light on the political developments in Armenia in recent years, in what is also known as the “Velvet Revolution” and the pursuing events.