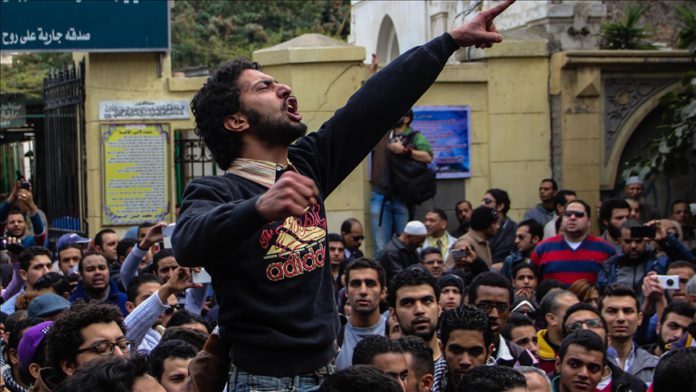 A decade ago, the last week of December had come with hope for the Middle East with scenes of mass protests gaining momentum that soon came to be known as the Arab Spring.

Ten years down the lane, experts believe that the failure of this movement has led main Arab actors in the Gulf region to expand their influence. But at the same time their rush for normalizing relations with Israel, falling to the US and Western pressures also exposes their vulnerability and fragility.

Speaking to Anadolu Agency, Muhammed Huseyin Mercan of Istanbul’s Marmara University said the significant changes have taken place in the basic dynamics of regional politics in the Middle East in the past decade since the uprising that had highlighted the power of a combustible street.

The Gulf region traditionally dominated by Saudi Arabia saw the rise of Qatar and the United Arab Emirates (UAE). They have created a new regional balance of power and gained a more important place in the region, said Mercan.

Seven Arab states are bordering the Persian Gulf, namely Bahrain, Kuwait, Iraq, Oman, Qatar, Saudi Arabia, and the UAE. All of these states except Iraq are part of the Gulf Cooperation Council (GCC).

Among these countries, the scholar said Qatar and the UAE were able to turn the Arab Spring to their advantage, although they employed different political perceptions and strategies.

To maintain the status quo in the countries that were shaken by the movement, Saudi Arabia and the UAE lent support to the regime members and secular opposition elements, thereby strengthening their influence in the region.

Qatar, on the other hand, consolidated its power by taking sides with Islamist opposition groups, the scholar added.

Since then Gulf monarchies have been trying to fill the power vacuum created by the street power and maintain regional balance, Mercan said.

“They have been striving to play a more active role in the region by maximizing their interests, to create a new balance mechanism in their relations with global powers,” he said.

The rise of Gulf states in the Middle East power equation had started with the US invasion of Iraq in 2003. According to the scholar, the Arab Spring accelerated the process of their rise and became a kind of turning point, leading them to consolidate positions in the region with their financial muscle and the relations they had established with global powers.

“The Arab Spring clearly showed the long-standing alliance between the autocratic regimes and the actors supporting these regimes in the international arena to hinder the expansion and consolidation of the democratization and reform process,” said Mustafa Yetim, a faculty member at Eskisehir Osmangazi University and also a specialist at the Center for Middle Eastern Studies (ORSAM).

Compared to other autocratic regimes in the region, the GCC members were more successful in maintaining “monarchical stability” in their countries, Yetim added.

Due to their rich economies based on oil and energy resources, the GCC nations did not witness strong uprisings.

While countries like Turkey, Iran, and Egypt are generally accepted as the central actors in Middle Eastern and North African politics, the Arab democratization movement made the GCC countries a new center of power in the region due to strategic alliances and competition.

“Egypt, once an important power in shaping the regional politics, has turned into a secondary actor which only approves the regional policies of the Saudi Arabia-UAE alliance after a military coup ousted the country’s first democratically elected President Mohammad Morsi in 2013,” Yetim said.

He said despite these GCC states ensuring their monarchial stability, their tendency to tie up with different regional and global engagements indicates that their “relative stability” is standing on fragile ground.

Referring to the recent trend of normalizing relations with Israel in the Arab world, Mercan said through this way countries like UAE and Bahrain are aiming to strengthen their position in the region by getting more support from global actors.

He said that the normalizing of relations with Israel by some Arab leaders were linked to pressures coming from the US and other Western nations and to maintain the status quo to ensure continuity of their regimes.

“Through its normalization deal with Israel, Sudan, for instance, takes a step towards joining the Western world to save the country from the recent systemic crisis,” he said.

Also, the recent normalization deals with Tel Aviv by Arab countries, such as the UAE can be seen as part of their efforts to limit the regional influence of the Turkey-Qatar alliance, according to Yetim.

UAE has been in cooperation with autocratic and anti-revolution regimes in Libya, Egypt, Syria, and Tunisia to prevent the consolidation of the Turkish-Qatari axis in the region, he said.

Yetim added that through the normalization deal with Israel, UAE is aiming to shift the regional power balance in favor of the Saudi-Emirati axis.