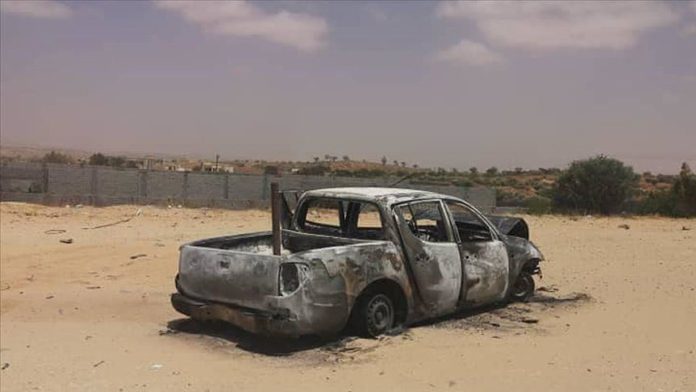 The failure of illegitimate forces in Libya and Yemen cost its supporter UAE billions of dollars, which provided weapons, ammunition and mercenaries to the militias in the two countries.

Supporting warlord Khalifa Haftar in Libya, the UAE clashed in Yemen even with the coalition it is part of and backs the separatist forces in the south.

Thousands of civilians have been killed in Yemen and Libya due to the use of these weapons supplied by the UAE.

The size of the UAE-originated weapons and ammunition seized by the Libyan army once again revealed how the Abu Dhabi administration spent a fortune on the weapons it sent to the region to reach its ambitious goals.

A report on Libyan released by the UN Security Council in December 2019 also confirmed the UAE’s support for the Haftar and clearly demonstrated the inventory of weapons and ammunition supplied.

The UAE also brings thousands of mercenaries from countries like Chad and Sudan to fight alongside Haftar.

Last year, Mohammed bin Rashid Al Maktoum, the vice president of the UAE, reacted to the situation at a secret meeting and called for reviewing the foreign policies of the country.

“We spend hundreds of millions of dollars every day and what do we get in return?” Al Maktoum said.

According to the report of the UN Security Council (UNSC), the UAE has frequently sent three types of UAVs, among the most supplied UAVs to the Haftar were the Chinese-made Wing Loong II.

Wing Loong II drones which cost $2 million per unit are among the UAVs which are frequently shot down by the Libyan army.

It is stated that the UAE used the Chinese-made Blue Arrow 7 missiles, with a unit price of tens of thousands of dollars, in UAVs.

The Yabhon-HMD produced by the Abu Dhabi administration in 2009, is also used for airstrikes by the Haftar forces. The price of Yabhon, which has a carrying capacity of 1.5 tons of ammunition, is reported to be $25 million.

Russian-made Orlan-10 type UAVs sent to Haftar are also among the aircraft used against government forces in Libya, and the unit price of these UAVs is around $120,000.

It was also added in UN reports that the UAE-controlled UAVs were deployed to the Al-Khadim Military Air Base near Benghazi.

In Libya, the UAE does not only defend the Haftar forces with UAVs, but also provides the coup general with Pantsir, a Russian air defense system.

Last month, the Libyan army destroyed nine Panstirs during operations within the borders of Tripoli, it was reported that SA-19 missiles, whose unit price is about $15 million, are also used in the Pantsirs.

Another important air defense system that the UAE sent to the Hafter militias is the US-made MIM-23 Hawk. While the unit price of the Hawk battery is $30 million, the price of each missile launched is around $250,000.

$18 millions worth of helicopter, speedboats

As a result of a secret investigation carried out by the UNSC in February, it was revealed that the UAE sent six South Puma helicopters to the Haftar militia for operations in Libya during June 2019.

According to the New York Times, the helicopters were provided to raid ships that brought aid to the Libyan government. It is reported that the UAE paid about $18 million for the six helicopters and two speedboats.

Armored vehicles made in UAE

Although the unit price of Pantheras, many of which have been destroyed or captured by the Libyan army, is not clearly known, they are considered to be high-cost armored vehicles. In addition to Pantheras, the Haftar militia frequently uses the costly UAE-made Nimr, Spartan and Tygra armored carriers during their combat.

UAE pays to mercenaries from Chad and Sudan

The UAE military officials provided tactical counseling to the Haftar forces on site, and the salary of Sudanese and Chad mercenaries was paid by the Abu Dhabi administration.

According to the UN reports, about 700 members of the Chad rebel armed groups and about 500 from the Sudanese Liberation Army serve Haftar in Libya.

The 1,000 members of Janjaweed militia from Sudan protect the critical Jufra air base controlled by the Haftar forces.

It is noteworthy that some of the commanders of the Janjaweed militia are on the wanted list of the International Criminal Court due to their massacres in Darfur.

According to international media reports, the number of Sudanese militia members who is fighting alongside Haftar has rose to 3,000.

The UAE also stands out as a key actor in the civil war taking place in Yemen between Iranian-backed Houthis and government forces since 2014.

The UAE is almost the only supporter of the separatist Southern Transition Council, which attacked government forces in Yemen and unilaterally declared “autonomy” in the south of the country.

According to the report by the Netherlands-based PaxforPeace, the Abu Dhabi administration sent several heavy weapons to Yemen as well as deploying its own soldier as part of the Arab Coalition.

The value of the weapons that the UAE sent to Yemen and imported from different countries is worth billions of dollars.

The UAE, once known as a center of attraction for tourism and finance investments in the Gulf region, has turned into a country of territorial ambitions with aggressive foreign policies, resulting in political crises and human rights violations, which is now drawing reactions from some of seven emirates in the UAE.

Like Saudi Arabia and some other oppressive Arab regimes, the UAE has one of the non-leaking governments. However, it was learned that a secret meeting was held several months ago on the country’s foreign policy and its interventionist attitudes towards the countries in the region.

The meeting which brought together the leaders of the emirates saw a reaction from Sheikh Mohammed bin Rashid Al Maktoum, the vice president and prime minister of the UAE, on the foreign policy.

He had emphasized that the country should give up its aggressive and intrusive foreign policy as soon as possible because it had cost enough to the country and that it had no benefits.