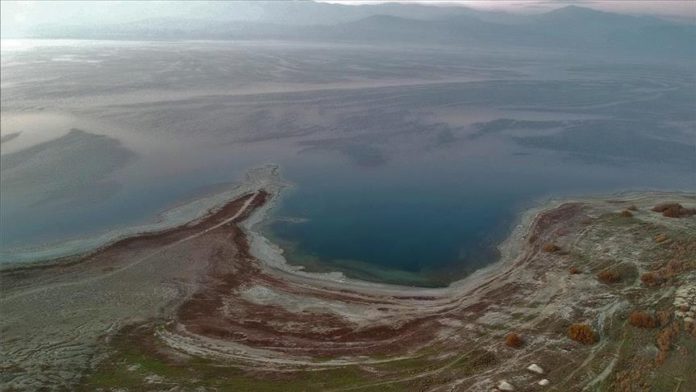 Ebb tides, evaporation, and excessive use of water in the last 20 years are the main reasons for drought in lakes, said an academic from a Turkish university.

Iskender Gulle, a biology professor at Burdur Mehmet Akif Ersoy University, told Anadolu Agency that drought is not a problem that a certain institution or non-governmental organizations can solve.

Gulle said if 30 to 40% of the water used for agriculture is used economically then lakes could return to their original state or at least maintain their current positions in the next 10-15 years.

He stated that the only solution to this problem is changing the models of crop production and animal husbandry in the basin.

According to data by State Hydraulic Works in the southwestern Burdur province, the water levels had been at their maximum level at the Lake Burdur since 1970, but there has been a drop in the levels especially after the 80s.

Tamer Albayrak, another biology professor at the same university, said the tides in the lake were triggered due to climate change. Referring to a gradual increase in average temperatures in Turkey, Albayrak said this increase was mainly due to the human usage of carbon fuels.

Albayrak said increasing temperature causes evaporation and a decrease in snowfall, adding a certain amount of water held in dams should be released into the lake.

“The tides in the lake cause several different environmental problems. Dust and decrease in water levels also change the chemical balance and increase the salinity rate. This negatively affects birds and other living creatures feeding on the lake,” he said.