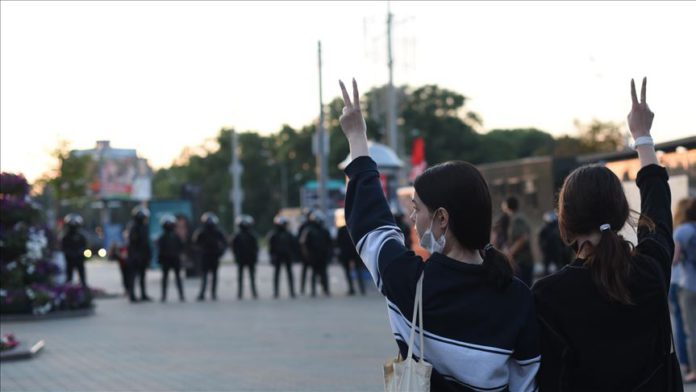 Belarusian experts have called protests against results of the presidential election in the country as “an attempt to organize a color revolution with foreign interference”.

A color revolution is playing out in Belarus, similar to those in Ukraine and Armenia, said Alexey Dzermant from the Belarusian Academy of Science.

Andrey Krivosheyev, head of the Belarusian Union of Journalists, echoed his view.

The term color revolutions was used to describe movements in the early 2000s that sprung in countries of the former Soviet Union.

Dzermant said the presidential election campaign was marked by appearance of new political figures who did not have any positive political agenda and worked only to organize protests.

The opposition candidates rehearsed the protests during their campaign events, he said.

They also simultaneously spread misinformation that incumbent President Alexander Lukashenko is unpopular and his support only amounts to 3%.

Choosing political strategist Vitaly Shklyarov to lead the campaign of the main rival Svetlana Tikhanovskay also reveals the sinister plot of organizing a color revolution, he said, claiming that the man is “the mastermind of social unrest” in Georgia, Russia and Ukraine.

Dzermant called that arrest of 33 Russian nationals in Belarus a “provocation” to create discord between the two allies.

“The security forces were very concerned about the possible organization of the Belarusian Maidan [protests against presidential election in Ukraine in 2014] — with people killed by snipers and other provocations. Perhaps someone used this situation to frame these guys — their arrival in Belarus could not be overlooked — and then use this scandal to put Russia and Belarus at odds,” he said.

Dzermant criticized the western countries for the pressure on Belarus.

“As for the West, it is always quite hypocritical about our state, and others too,” he said.

Asked about the arrests of opposition candidates Victor Babariko and Sergey Tikhanovskiy, Krivosheyev said they should not be linked to the presidential campaign.

He added that Babariko was detained after the authorities got incriminating documents form the US, Cyprus and Latvia.

He went on to say that the opposition candidates altogether gathered 20% of the votes only.

Many foreign countries are interfering in Belarus’ internal affairs, including the Baltic States, Czechia, Russia, Ukraine and the US using social networks and media resources, the expert added.

He called on the West to take an impartial position, saying that supporting the opposition and illegal protests is contradictory to the appeal of holding “fair election”.

Turkey, on the contrary, has a “balanced approach” to what is currently happening in Belarus, the expert added.

“Turkey’s balanced approach comes from a very long-standing honest and open partnership between our countries and our leaders. That is why we have great respect for Turkey’s balanced position,” he said.

The expert drew parallels with the Ukrainian events of 2014, saying there are similarities: turning the social problems into internal conflict, using social networks and Internet to raise public disapproval of authorities and external management of all the processes.

“Belarus protestors also use methods used by protesters in Ukraine and Armenia, the United States, the European Union, and Turkey. They follow the method by which external forces try to use this or that discontent of society,” he said.

Alexander Lukashenko officially won Sunday’s election with 80% of the vote. His main rival Svetlana Tikhanovskaya scored only 10.09%. The opposition refused to recognize the election results and launched demonstrations.

EU-US leaders' summit to be held in June