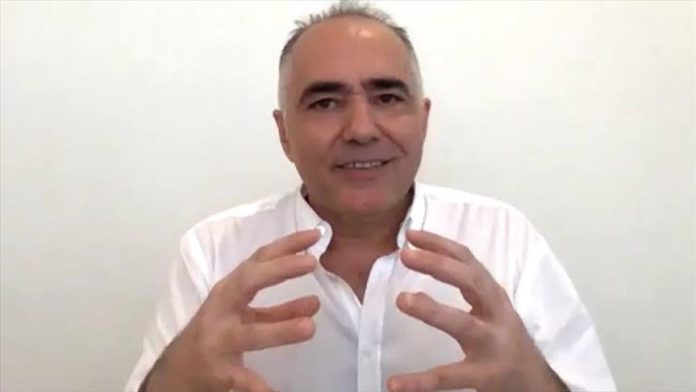 An online exhibition of the works of renowned photographers who documented the travails of refugees, Exodus-Déjà Vu has received international acclaim since its inauguration on June 20, the World Refugee Day.

The name Deja Vu comes from the people who are forced to leave their homes and countries, according to Patrice Vallette, the curator of the exhibition.

The exhibition was scheduled to start in New York physically but later moved to an online platform due to the coronavirus pandemic.

The exhibition, featuring many renowned photojournalists who have worked in conflict zones, will end in September.

Vallette talked to Anadolu Agency about his impressions of the exhibition and its success so far and answered questions.

Exodus-Deja Vu started in 2015 in a bid to raise more attention to the problems of refugees around the world.

“The name we chose is Exodus-Deja Vu, because when people are forced to leave their countries due to different reasons, it creates an exodus.

Deja vu, on the other hand, was chosen because we wanted a term that would be understood by most of the people around the world.

“In addition, the situation of refugees already creates a deja vu around the world, nearly for a century now, recurrently,” said Vallette.

The project started with the meeting of world-renowned war photojournalist Coskun Aral and Vallette in Kuala Lumpur, Malaysia.

“As I learned about his works featuring refugees fleeing from Iraq to Turkey from Saddam’s brutality in 1991, I was very impressed. It was the beginning of the exode for the Syrian people,” said Valette.

The core idea in this photo exhibition was to create a narrative focusing on refugees, he described.

The first exhibition was held in Kuala Lumpur in 2015 and the exhibition team also published a book with the photographs.

The team aimed at adding more activities from around the exhibition to attract more people to see the work of the photographers.

They worked with universities and schools to create interactive results.

‘We had to accept new reality, focus on our work’

“Originally this year the exhibition was going to start in New York in its opening on June 20. But then we had to accept that we wouldn’t be able to do it. We had to focus on what we were doing.

“We started thinking about doing it online on June 20 with the means that we have. From the chaos of the pandemic, we created a new opportunity,” said Vallette.

The reactions that he received from the photographers about doing the exhibition online were very positive and supporting.

The exhibition team had interviews with 13 photographers, journalists, and speakers of the UN, and EU migration department officials.

There were more than 1,300 viewers following the online interviews.

More than 30 press articles were written about the exhibition.

With the exhibition closing in September, Exodus-Deja Vu team will also publish a report on numbers recorded throughout the display.

The curator said they are very content about the interest until now.

“We are in the middle of the pandemic and waiting for a cure, but our vaccine, for now, is to be creative, to support each other, to be all in this. When people really get together, just like our photojournalists did despite the difficulties, the real healing will begin,” he added.

Media plays a significant role in the images that they carry and stories the journalist file in terms of portraying the people’s suffering in the crisis areas, said Vallette.

Looking at shocking, emotionally disturbing images, and sharing them creates a paradox.

“There is a machine [media] working, and you have to feed it every minute. But there should also be professional conscience, a balance between what is horrible and what is real.

“Our exhibition is about creating an experience, not just showing these disturbing pictures. What we see always comes back to us. The question Exodus-Dej Vu asks is: Do we justify people’s suffering by showing them? Do we constantly need to show them?”

There are no good and absolute answers to these questions, but what Exodus-Deja Vu tries to do is not mere exposure to disturbing images, but to make the viewer a part of this experience, according to Vallette.

“Remember little Aylan Kurdi, the Syrian migrant child who was washed up to the Aegean shores?

“A photojournalist and friend of mine from Izmir, Turkey took some pictures. She sent them all to me, I have seen them and still have them. These pictures are from the shores, many children and some adults lying on the beach dead, just like Aylan Kurdi.

“I heard then that German Chancellor Merkel saw these pictures, and that was in the time when Germany opened its borders to 1 million children. One specific picture sealed her speech,” said Patrice Valette, narrating an anecdote.

Even if this has not happened, the power attributed to photography by the people can be seen in this anecdote.

The photograph itself, but also the emotion created there, is very important.

Every project with narrative contributes to photojournalism

Exodus-Deja Vu project has been a very important project for our agency, Visioncy, Vallette, said. “We have learned a lot, progressed.”

Every project which can show a narrative and has a specific approach will contribute to photojournalism, according to him.

“I’ve been working with photojournalists for a long time. As long as we have a proper platform and we are willing to grow, we can always contribute to photojournalism,” he added.

It is very hard to pay attention to refugee crisis happening around the world as there are so many of them.

“For instance, there are over 3 million refugees between Venezuela and Mexico, but we can’t pay a lot of attention to all of these crises at the same time,” said Valette.

The main job of a news agency is not to exhibit or curate, but maybe that is where we are going in the future, Vallette opined.

“I look forward to professionals from different fields supporting each other more to send messages of photographs around the world. I would like to thank Anadolu Agency for supporting the project,” he said.

Curators, editors, press agencies, and photojournalists should work hand in hand to create this kind of a unique narrative, he urged.

“Photography covers every language. For photojournalists to support and rate their work, promote their work, this is the best time to do it, among all the crises that are happening, but beyond that as well,” he added.

The first Exodus exhibition in Kuala Lumpur was followed by showings in Bangkok, Chiang Mai, Ankara, and Istanbul.

It was set to tour European and US cities in 2020 but the plans were shelved due to the pandemic.

The organizers, though, remained undeterred and completed preparations for a virtual exhibition, incorporating the various possibilities for the expression of art and ideas offered by modern technology.

The exodus began with contributions from five photographers and now showcases the moments captured by a dozen photojournalists in the perilous journeys of refugees in different parts of the world.