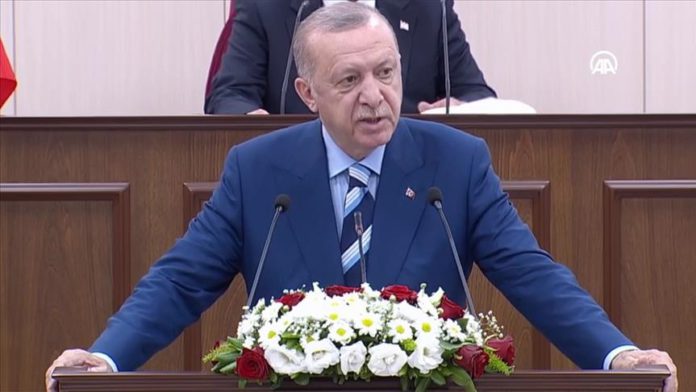 The Turkish president said on Monday that the existence and unity of the Turkish Republic of Northern Cyprus (TRNC) are “above all political considerations.”

Speaking in the TRNC’s parliament, Recep Tayyip Erdogan said Turkey “fully” supports the proposal of TRNC President Ersin Tatar in Geneva. “We cannot and will not compromise,” he added.

Earlier in the day, the president said any new negotiation process in Cyprus can only be held between two equal and sovereign states.

Every year the TRNC celebrates July 20 as its Peace and Freedom Day to mark the operation – a large-scale military intervention to protect Turkish Cypriots from the violence that struck the island in 1974.

The Greek Cypriot administration entered the EU in 2004, the same year when Greek Cypriots thwarted the UN’s Annan plan to end the decades-long dispute.

Seeking a fairer approach to the Cyprus issue, the Turkish Cypriot president has proposed establishing a cooperative relationship between the two states on the island, with both enjoying equal international status.