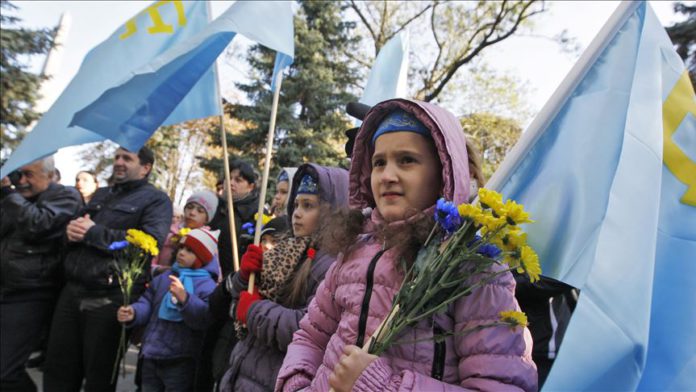 The Crimean Tatar people have never been caught up in hopelessness and despair and have not given up the fight, an official said Monday.

Crimean Tatar leader Mustafa Abdulcemil Kirimoglu, who is also a deputy in Ukraine’s parliament, was speaking as various events were held in Ukraine to mark May 18 as a day of remembrance for the victims of the Crimean Tatar genocide, and many people around the world took part in a rally held via video conference.

“I am sure that the Tatars will get rid of the invaders and will be the Crimean Tatar Republic,” said Kirimoglu.

“The main aim of the exile was to destroy the Crimean Tatar people as a nation and make Crimea part of the Russian world,” he said, stressing that it was a crime against the Tatar people.

He pointed out that Tatars had been struggling with the Soviet regime to return to their homeland, recalling Russia’s invasion of the Crimean peninsula in 2014.

Refat Chubarov, president of the Crimean Tatar National Assembly, also pointed out the importance of the rally.

“The Tatars in Crimea cannot attend our meeting because of the occupiers. But know that their ideas are the same as ours.”

In a post on Twitter, Ukrainian President Volodymyr Zelensky said: “We believe that one day, Crimea will return to Ukraine. Crimean Tatars and Ukrainians will return to their homes, gather at the same table to say together ‘For your and our freedom.’”

They were deported to various regions within Soviet territory, in particular Siberia and Uzbekistan. Almost half of the exiles, who endured long months of dire living conditions, are thought to have died of starvation and disease.