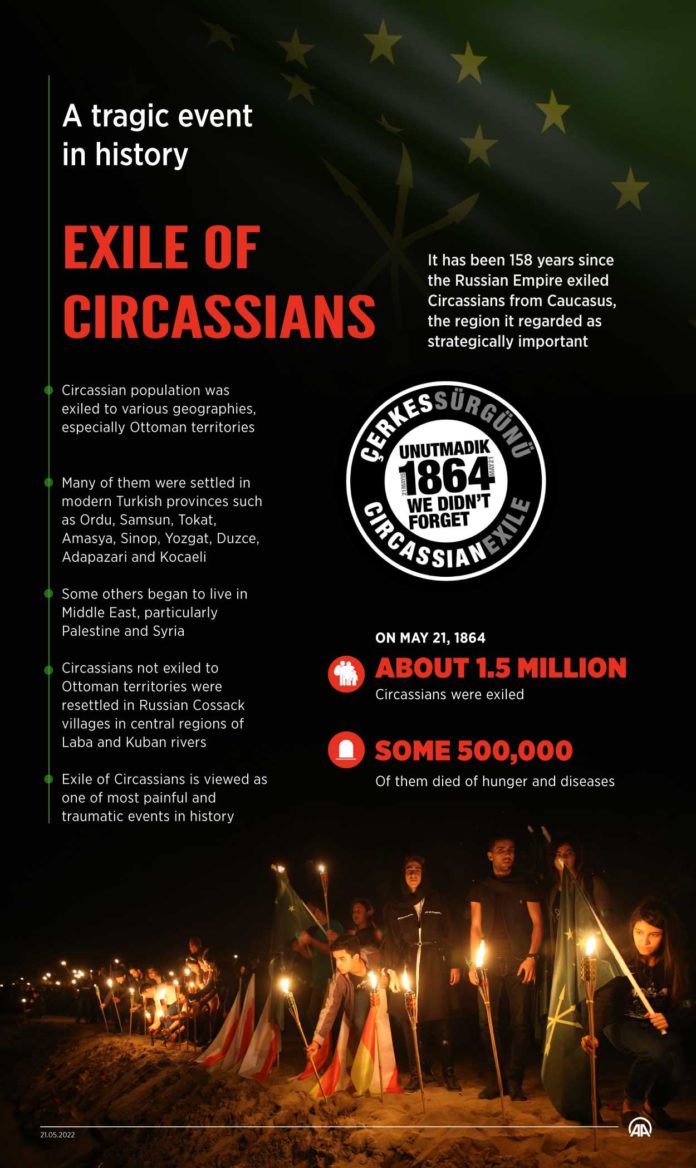 It has been 158 years since the Russian Empire exiled the Circassians from the Caucasus region, regarded as strategically important.

In an effort to seize the northern Caucasus as part of its goal of controlling the Black Sea coasts, the Russians declared war on the Caucasus in 1556 and warfare continued for 308 years.

The Russian armies advanced deep into the mountainous regions and forced the surrendering Circassians to migrate or join its military organization.

Most of the Circassians were exiled to various parts of the globe, the Ottoman territories in particular, from 1864 onwards after the Russian Empire Caucasia invaded Caucasia, a region extending east from the eastern Black Sea to the Caspian Sea.

According to the unofficial figures, about 1.5 million were banished within a mere month; the epidemics as well as hunger and severe road conditions led to the deaths of 500,000 of them.

Many of the exiled were put on ships from the ports of the Black Sea, including Anapa, Novorossiysk, Sochi and Adler and were resettled in Anatolian cities in modern-day Turkiye such as Ordu, Samsun, Tokat, Amasya, Sinop, Yozgat, Duzce and Adapazari.

Others were taken to the Middle East, especially the Syrian and Palestinian regions. The exiled Circassians transformed into local communities.

As for the Circassians who were not sent to the Ottoman Empire’s regions, they were settled in villages in the central part of the rivers of Laba and Kuban.

The exile of the Circassian people is viewed as a planned operation implemented by the Russians and their forced migration is remembered as one of the “most tragic” incidents in history as many perished even before making it to the Ottoman Empire.

In a plight similar to Crimean Tatars, nearly 1.5 million Circassians were expelled from the region to the east of the Black Sea when it was overrun by Russia in 1864. Some 400,000-500,000 are believed to have died.

Most Circassian exiles were absorbed into the Ottoman Empire, settling as far away as present-day Jordan.