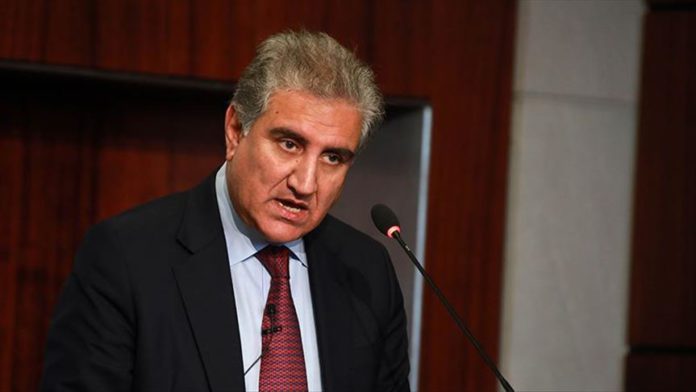 Pakistan’s foreign minister, defense minister, and national security advisor on Monday visited the Line of Control (LoC), just two days ahead as Islamabad marking Aug. 5 as the Day of Exploitation in solidarity with the people of Indian-administered Kashmir.

Speaking to reporters after a detailed briefing from the sector commander of Pakistani army at the Chirikot forward post, Qureshi said Kashmiri people have rejected the Indian government’s Aug. 5 actions last year.

“Kashmiri people have rejected the Indian government’s illegal actions last year while for the first time in the last 50 years, the UN Security Council hold meetings on the Kashmir issue,” Qureshi added.

On Aug. 5 last year, the Indian government stripped the Muslim-majority disputed state of its autonomy. Jammu and Kashmir was also split into two federally administered territories.

Qureshi praised the Organization of Islamic Cooperation’s (OIC) role and said that the OIC Contact Group on Jammu and Kashmir has raised its voice against the Indian illegal actions and endorsed his country’s stance on the issue.

Turkey, Pakistan, Azerbaijan, Niger, and Saudi Arabia are the members countries of the contact group on Jammu and Kashmir.

“India is now isolated, Iran has kicked out India from [its port of] Chabahar, Nepal also claimed its territory and what happened with India in Ladakh, the world also saw it,” Qureshi said.

Qureshi was referring to the border clash between China and India in June, killing at least 20 Indian soldiers, including a commanding officer in Ladakh of the disputed Jammu and Kashmir region — the first deadly clash between the two border forces since 1975.

Earlier, the military official briefed the key Cabinet ministers regarding the situation on the LoC and said cease-fire violations (CFVs) have risen on the de facto border since 2016 after the killing of Burhan Wani.

The death of Wani, an iconic militant commander who was killed on July 8, 2016 in clashes with Indian forces, caused a fresh wave of violence in the disputed valley.

“So far, 115 civilians were martyred and 614 others wounded in Indian cease-fire violations,” the sector commander of Pakistan army who spoke on condition of anonymity.

New Delhi also accused Pakistan, saying that the latter violated the cease-fire 2,027 times as of June 10, according to local daily Economic Times.

Pakistan has launched a project to build secure rooms inside the houses of civilians living along the LoC, to protect them from firings of Indian forces.

“We have started an action plan to protect the people of Azad Kashmir from the Indian cease-fire violations, constructing bunkers inside their houses,” Qureshi said.

Responding to a question, the sector commander rejected the New Delhi’s claim of infiltration of militants from Pakistan and showed the photos and videos of the LoC where Indian forces fenced the border, describing how hard it is for one to cross such barriers.

“There is fencing, mines, surveillance cameras all over the LoC, so how can someone cross the line and enter into the Indian side?” he questioned.

New Delhi accuses the longtime rival Islamabad of arming and training the militants to fight the Indian rule.

Later, Qureshi, Khattak, and Yusuf also met with victims who were injured in the attacks of Indian forces and assured them of their country’s full support.

“Today, we visited here to greet you in Eid al-Adha and assure you that you are not alone, we all are standing behind you,” the Pakistani foreign minister told them.

Some groups in the Indian-administered Kashmir have been fighting against the Indian rule for independence, or unification with neighboring Pakistan.