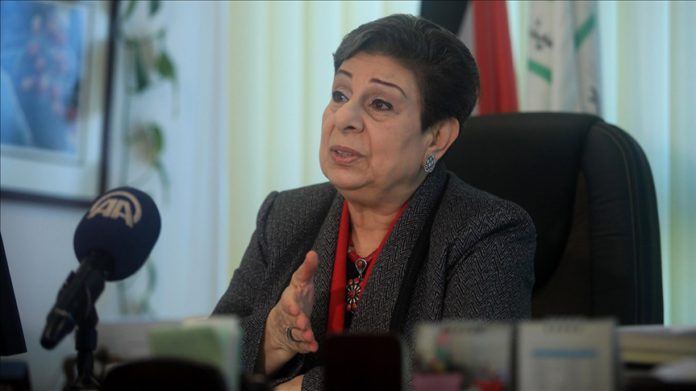 Hanan Ashrawi left the Palestine Liberation Organization (PLO) due to the weakening of its highest political forum – the Executive Committee – as well as delayed elections and stalled democratization and unification efforts, the veteran Palestinian leader and scholar told Anadolu Agency.

In her first exclusive interview since stepping down, Ashrawi, 74, who shot into prominence after becoming spokesperson for the Palestinian delegation to the 1991 Madrid peace talks with Israel, said her resignation was a clear message that there should be seriousness in implementing the decisions of the PLO’s central and national councils.

Pointing to a “sideline” in making decisions, Ashrawi said they “were taken without even consultations, information, or informing the Executive Committee,” she said.

Over the years, the Palestinian political situation has undergone significant changes, with many members of the committee either leaving or passing away.

Ashrawi, the committee’s only woman member, herself stepped on Dec. 8.

“I hope that my resignation sends a clear message that I am serious and that serious business has to be done – the things we decided on and wanted to implement, including the decisions of the central council and national council,” she said.

“I think we can’t keep ignoring [this],” she added.

Ashrawi said her resignation was more than a one-off event or a mere decision. She alleged that decisions in the PLO were taken without consultations or informing members of the Executive Committee.

“It was a result of an ongoing decision-making process in the Executive Committee of the PLO, which has weakened the highest political body in Palestine,” she explained.

Lack of progress towards democratization

She also said there was a lack of progress in preparing for elections as well as in democratization and unification efforts.

“All these factors accumulated and led to my decision. I wanted to have new people, young men, and women to activate the PLO and its bodies,” said Ashrawi, who served in the PLO’s top body since 2009 until her resignation.

“I had told the president I don’t want to be considered for the next PLC [Palestinian Legislative Council] elections. Please do not nominate me again,” she said.

“But as a result of a lot of pressure by him and other factions, I agreed on the condition that I would not stay there for a long time,” she added, saying that she wanted to make way for the next generation.

Ashrawi has held several positions, most notably minister of higher education in 1996, and served as a member of the Palestinian Parliament from 1996 until its dissolution in December 2018.

But she said she felt unable to fulfill her obligations as an effective component in the system.

“I have frankly given way because the system is weakened, and not being part of the decision making. I wanted either to be an effective component or not at all. Either I fulfill my obligations and the demands of the PLO or I step out,” she added.

Ashrawi said that her decision may trigger a new phase in Palestine’s political situation, perhaps leading to young men and women taking over the decision-making process.

Many experts also believe that besides the controversial normalization process initiated last year between several Arab countries and Israel, the Palestinian Authority faces many other challenges, including the postponement of a reconciliation agreement and delayed elections. The issues need a clear and coherent unified Palestinian approach, say analysts.

Ashrawi also maintained that the normalization process has a serious and dangerous effect and it needs a unified Arab response.

“We made many mistakes, but this is not the time to start self-flagellation,” she stressed. “Every mistake has to be understood within the context, evaluated within the conditions. We should know that our responsibility is to rescue the Palestinian people and land.”

Despite the political vacuum in the Executive Committee, as of now there are no new members, as a result of PLO factions who renominate and re-elect their people without giving real opportunities to young people, said Ashrawi, who was elected to the committee twice.

“They repeat themselves, bring the same people. I think it’s time for those who are in positions of authority to understand that they have to make way for younger generations,” she said.

30% allocation for women not implemented

Despite a decision by the Palestinian Central Council to reserve 30% of the political positions for women and also make way for more young people, the move has not been implemented and is still getting postponed. As a result, the political situation is not moving forward.

“This is because those who have the power are either irresponsible or they feel a sense of entitlement,” said the academic turned politician.

Before entering politics, Ashrawi headed the Faculty of Arts at Birzeit University, in the West Bank, near Ramallah.

Ashrawi believes it is time to work to revitalize and reactivate the political organizations – the PLO, Palestinian Central Council (PCC), PLC, and the presidency.

The last elections for the Palestinian presidency were held in 2005. A year later, PLC elections were held

“We have been demanding and recommending conducting elections. But the committee did not finish its work seriously and did not finalize its plans, unfortunately,” she said.