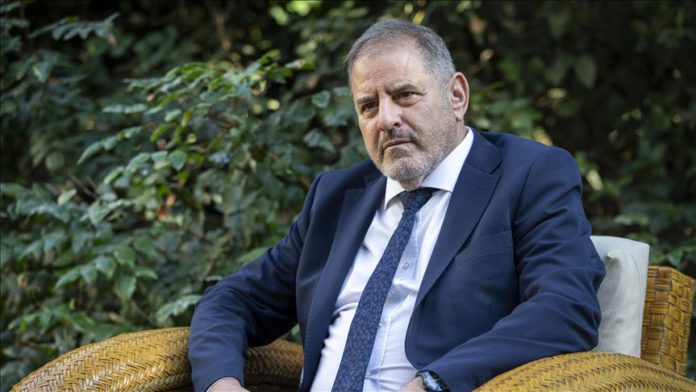 The dispute in Eastern Mediterranean “cannot poison other relations, it has to be encapsulated,” and negotiated bilaterally between Turkey and Greece, the newly appointed Spanish ambassador to Turkey said.

“Spain is a very good friend of both countries of Greece and Turkey. And we understand the different positions. But we think that the important thing is that we find a negotiated solution,” said Javier Hergueta, speaking exclusively to Anadolu Agency, a day after presenting his letter of credentials to Turkey’s President Recep Tayyip Erdogan.

“Eastern Mediterranean cannot poison the other relations, you know, it has to be encapsulated. It has to be, as your government says, negotiated bilaterally with Greece. And we support those efforts,” he added.

He said, Erdogan’s proposal, at the 75th General Assembly of the United Nations, for a regional conference to address disputes in the Mediterranean, with the participation of all coastal states, to find solutions to the existing problems was “a very good one” and they listened “with great attention.”

“In fact, what happens is that the European Union is also taking it into consideration. The last time President Erdogan and President Charles Michel of the European Council spoke, they talk precisely about that. And they agreed to explore the possibility,” he said.

“I think, if we have enough imagination, it will be a very good way forward,” he added.

On EU-Turkey relations, Hergueta said Spain has worked with current the German term presidency on “constructive policy” towards Turkey.

“We don’t believe in sanctions, what we believe is that we have to offer Turkey, a possibility of approaching the union, a perspective,” said Hergueta adding EU foreign policy chief Josep Borrell “has a mandate of the council precisely to explore that.”

“The way to explore it is that we accelerate the starting or the restarting of negotiations in certain aspects that we have pending, like, for example, visas, the migration issue, and the agreement on the Customs Union,” he said.

The envoy said the Customs Union agreement is very important for both Turkey and EU countries because it is the instrument to speed economic relations.

Hergueta said, many Spanish companies have been benefiting from the agreement.

“What happens is that more and more Spanish companies come to Turkey to either open factories or contract with Turkish companies. For example, the textile groups like Inditex, Mango and so on, they employ no less than 400 Turkish companies to manufacture for them. So, this is a phenomenal thing,” he added.

He said, Spanish companies found that manufacturing in Turkey is more efficient than in China at the same prices.

“It is a great opportunity for Turkey because, as your president says, Turkey can become the factory of the world. And it could make you very rich. And it’s a very interesting prospect. And for us, it makes us very competitive, because we can export from here,” he said.

“This is a very interesting common ground that we have, Spain and Turkey. Because it means foreign investment, making a bigger industrial production in Turkey. And it’s a very good win-win situation for all of us,” he added.

Regarding the relations between Spain and Turkey, the ambassador Hergueta said, “there is very little room for improvement” because the two countries have “excellent” relations.

“The moment coronavirus finishes, our plan is to bring as many companies as we can here to see the opportunities that the Turkish market offers,” he said.

“And, also, to see the opportunities of investment because what we want is for them to see the factories that are already established here,” he added.

Hergueta said, most of the Spanish companies in Turkey have a very good experience and bringing them with new Spanish investors can benefit both Turkey and Spain.

“We can be complimentary. So, I think we have a very big sort of economic understanding, and it will go on to become bigger.”

He said, the effect of the COVID-19 pandemic on the economic relations between the two countries may not be as big as what was imagined at the beginning but it depends on how long the pandemic will last.

Hergueta also expressed his pleasure to come to Turkey as an ambassador.

“When they offered me to come to Turkey as an ambassador, I was really happy because it was the post of my life, to put it in this way,” he said, adding he had been in Turkey several times before and knows Turkey, its history very well.

“I know Turkey pretty well. I study a lot the Turkish history and all that. And I know Istanbul very well. I’ve been so many times and I used to have family holidays in Istanbul because this is one of the nicest cities in the world,” he said.

He said, Turkey has improved in recent years in terms of infrastructure as he has been visiting the country since the 80s.

“I haven’t seen in Europe, motorways like Ankara, Istanbul, with three lanes, with four lanes with lights and so on. The same with bridges. I am very impressed by the effort of the state in Turkey because it shows that Turkey has a purpose,” he said.

“And they have the determination to build and they have built in a magnificent way. You see everywhere around is, you see the signs of prosperity,” he added.

The ambassador also thanked Turkey for sending ventilators and medical aid during the first wave of the COVID-19 pandemic in Spain.

“We thank you very much because especially there was a consignment of breathing machines. That was delivered so we were very happy with it. We thank especially your government for allowing because we know that it was a very difficult time also for you and you make the effort to let us have those machines, which was vital for us,” he said.

Cultural activities of the Embassy

The ambassador said, Turkish and Spanish people know each other very well.

“I think that Turkey has, like 10 flights a day to different parts of Spain, not only Madrid but also Valencia, Bilbao, Barcelona, Malaga, many places. A lot of Spanish people come to Turkey, for holidays. And for other purposes as well, sometimes medical treatment, especially hair transplants, and things like that,” he said.

“I think both the Spanish people in Turkey and Turkish people in Spain feel very well when they are there,” he added.

The pandemic, according to Hergueta, is a problem but also an opportunity.

“We have approximately now, one activity every two days, about 14 a month or more. And I think next month will be more than 20. So, it is very good, because we are allowed to do many things,” he said.

He said the embassy wants to bring “Spanish people that are famous if possible, to explain their relation with Turkey their experience in Turkey if possible.”

They are also planning activities together with Latin American societies in Turkey, the ambassador said.

“It’s very fruitful, I mean, this is giving us the opportunity also to be known in different parts of Turkey,” he added.