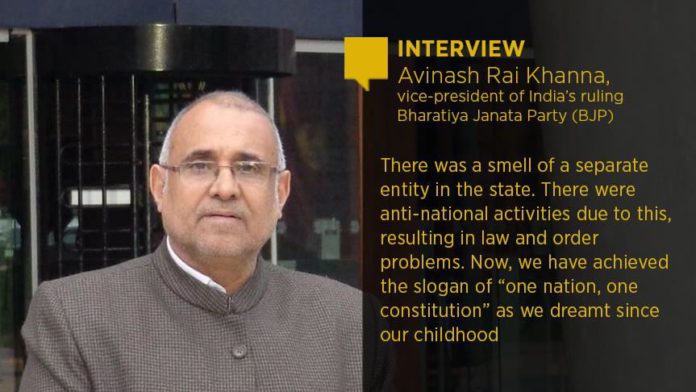 Top leader of India’s ruling Bharatiya Janata Party (BJP) said that annexation of Jammu and Kashmir last year has removed a notion that it was a separate entity.

“There was a smell of a separate entity in the state. There were anti-national activities due to this, resulting in law and order problems. Now, we have achieved the slogan of “one nation, one constitution” as we dreamt since our childhood, said Avinash Rai Khanna, vice-president of BJP, in an exclusive conversation with Anadolu Agency on eve of the first anniversary of India’s revocation of the special status of Jammu and Kashmir.

Khanna, 60, BJP’s in charge of Jammu and Kashmir has also served as a member of parliament. He claimed that by removing anomalies, some 100,000 Hindu refugees who had migrated from Pakistan at the time of independence in 1947 got citizenship rights in Kashmir, after the annulment of special status.

“Had they [Hindu refugees] settled elsewhere, like our former prime ministers Manmohan Singh and Inder Kumar Gujral, they would have enjoyed citizenship and important positions. But decades later, these Punjabis were still being called refugees,” he said. Both Singh and Gujral had migrated from Pakistani part of Punjab at the time of the Partition of the Indian subcontinent.

Asked about human rights violations in the region, as documented by a group of eminent Indian citizens including former judges of the supreme court, chief justices of various high courts, top bureaucrats, and ex-military officials, Khanna said bigger changes do have consequences.

“People [involved with this group] need to understand that we are working for a better tomorrow and these issues are consequences. We should keep our focus on the big picture, which is to save the people of Kashmir, “he said.

Anadolu Agency: A year after now revoking the special status of Jammu and Kashmir, what is the road map ahead to revive political activity in the region that stands stalled?

Avinash Rai Khanna (ARK): Political activity was never completely stalled. We recently had local body elections, which is a part of a three-tier democratic system, and the participation was huge.

The local member of parliament had been decided already. The other major elections will occur after Jammu and Kashmir is given a statehood. But rest assured, we believe in democracy and electing a government.

Q: Why did you think the special status of the region under Article 370 of the Indian constitution was coming in the way of combating terrorism and anti-national activities?

ARK: This was the only state in India that had its flag and sperate constitution. All the 106 amendments that had been made to the Indian constitution to make the lives of people better, applied to all the other states but not to Jammu and Kashmir. There was a smell of a separate entity in the state. There were anti-national activities due to this, resulting in law and order problems. Now, we have achieved the slogan of “one nation, one constitution” as we dreamt since our childhood.

Q: Since you believe that this special status was giving flip to separatist tendencies, now after one year, how much such activities have been controlled?

ARK: People who came from western Punjab now in Pakistan in 1947 at the time of independence were still addressed as Pakistani refugees, in their own country only because they came and stayed in the Jammu and Kashmir.

Had they settled elsewhere, like our former prime ministers Manmohan Singh and Inder Kumar Gujral, they would have enjoyed citizenship and important positions. But decades later, these Punjabis were still being called refugees.

Since nullifying the special position, 100,000 such refugees immediately became Indian citizens. This shows how much the decision of abrogating this article has helped people.

Q: Have things changed since its abrogation? And those who wanted peace have got peace?

ARK: The last regime ran by the two prominent families of Kashmir was not at all democratic. Former chief ministers like Farooq Abdullah his son Omar Abdullah and then Mufti Mohammad Sayeed and his daughter Mehbooba Mufti ran the state like monarchs.

All the money which is being used for public services should be in the public domain, but these people never disclosed anything. People of the state were away from the administrative and public systems. This led to mistrust between people and the administration.

Now, our Prime Minister Narendra Modi has announced all the expenditure will be available in the public domain. People are beginning to trust. This is why we had over 80% voting in the local body elections, after 19 odd years.

Q: When you claim law and order situation has been tackled, there have been attacks on your party leaders? Shall we call it a safe environment?

ARK: One of our party leaders in the Bandipora district in Kashmir was recently killed along with his father and brother. This has been a problem in the area, where people who raise the Indian flag become the soft target.

Security forces have now taken proper measures and I can assure that recently, the number of militants killed is much higher than the number of people killed. Thus, people are now safer than ever. Our government is making sure that proper development takes place in the region. The money is reaching the right hands and the development has started at the local level.

Kashmir integration was dream of RSS

Q: A human rights group including former judges of the supreme court and chief justices of various high courts and top bureaucrats and ex-military officials recently released a report pointing out incidents of human rights violations since Aug. 5, 2019. What is your view on this report?

ARK: These are some repercussions when the bigger change takes place. People [involved with this group] need to understand that we are working for a better tomorrow and these issues are consequences. We should keep our focus on the big picture, which is to save the people of Kashmir.

The development has started as new schools and education centers are coming up. People with no domicile now have citizenship and a place they can call home. Let us just say that we have removed a big disgrace in the form of Article 370. Most of the region has become peaceful and the rest is on its way.

ARK: Never. This is something we have been taught to condemn since we joined RSS [Rashtriya Swayamsevak Sangh – patron of all right-wing Hindu organizations] as kids. This is like a dream come true to see Kashmir integrated with India.