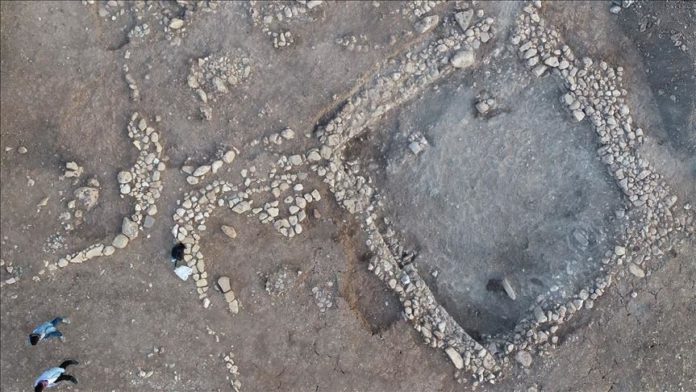 Turkish archaeologists began excavations in an area where 2,000-year-old rock tombs were unearthed and bear resemblance to the discoveries in the ancient site of Gobeklitepe, known as the world’s oldest temple.

Sanliurfa Metropolitan Municipality in cooperation with the Culture and Tourism Ministry carries out the excavations in the Kizilkoyun Necropolis area, where 2,000-year-old rock tombs were discovered.

The excavation, which started near the area where the statue of Balikligol dating to 9500 B.C. is located, created excitement that new discoveries may also be made.

The statue — also known as Urfa Man, 1.80 meters tall and dubbed the “oldest naturalistic life-sized sculpture of a human” — attracts attention with its similarity to the discoveries in Gobeklitepe.

New artifacts are expected to be found to solve the mystery of Gobeklitepe in the excavations that started in the area where some mosaics depicting hunting Amazon queens were found earlier.

Zeynel Abidin Beyazgul, the mayor of Sanliurfa Metropolitan Municipality, said that the city is an important cultural metropolis as it hosts many civilizations.

He told Anadolu Agency that the excavations around the Kizilkoyun Necropolis will contribute to solving the mystery in surrounding Gobeklitepe.

“Kizilkoyun, one of the most important necropolises of Edessa city, is very rich in terms of tomb sizes and decorations.

“The Balikligol sculpture found around the Balikligol Basin is also related to Gobeklitepe,” he said, adding the ancient site “contains many mysteries”.

“We believe that the excavations we will carry out in the area where artifacts similar to the discoveries in Gobeklitepe have been found will help solve the mystery” in the ancient site.

Beyazgul said that a total of 662 shanty houses were demolished in the area and 61-rock tombs unearthed.

Gobeklitepe, in the Turkish province of Sanliurfa, a site declared an official UNESCO World Heritage Site in 2018, was discovered in 1963 by researchers from the universities of Istanbul and Chicago.