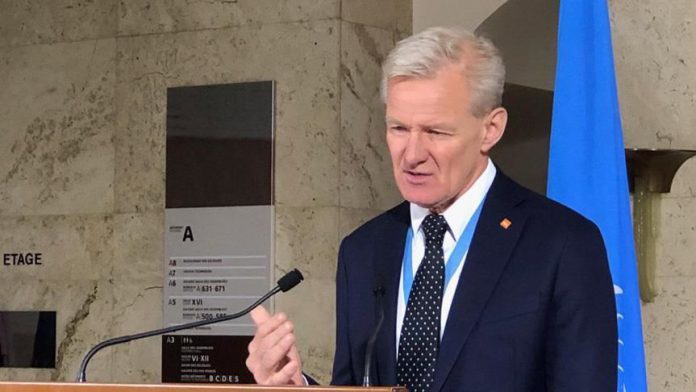 Resumption of fighting in Idlib, northwestern Syria, amid coronavirus would be catastrophic, a former top UN diplomat, who heads the Norwegian Refugee Council, said on Tuesday.

“Resumption of fighting now in Idlib on top of the spread of the pandemic — because the virus is already in Idlib — would be an unmitigated disaster for all of Syria,” Jan Egeland said while speaking of the nine year-conflict.

Egeland served as the UN special adviser on humanitarian affairs for Syria until the end of 2018 and spoke to journalists via a videoconference from Geneva’s UN press association (ACANU).

He was responding to a question on Idlib, but he did not elaborate on the presence of the novel coronavirus there.

“Idlib is a gigantic refugee camp. There are hundreds and hundreds of settlements of the internally displaced where people are extremely vulnerable. People are crammed together.” said Egeland.

He also commented on the stalled Syrian Constitutional Committee — comprising members of opposition, civil society, and the Bashar al-Assad regime — that failed to get past its first round at the end of November 2019.

“I wouldn’t really comment on the constitutional committee beyond saying we urge all parties to put away their political differences and see that we have now a common enemy, we have a common threat, which is this pandemic, the virus,” said Egeland.

He said now is the time to go to the table to compromise.

“So, they cannot restart the war.

“We cannot have a resumption of all that, and I think that it will not happen,” said the former UN envoy.

It said that there is now an all-time high of 45.7 million internally displaced people by violence around the world.

They are living in internal displacement due to conflict and violence in 61 countries, the majority in Syria, the Global Report on Internal Displacement (GRID) found.

Among them, 33.4 million new displacements were recorded in 2019, the highest annual figure since 2012.

Idlib has long been under siege by the Assad regime forces and its allies, and previous cease-fires for the region were repeatedly violated.

Turkey has worked to protect the local civilian population in the area and rid the wider region of terrorist elements.