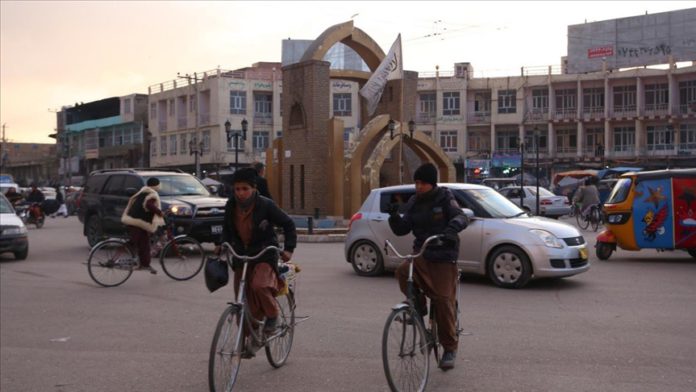 Timothy Weeks, 54, an Australian teacher kidnapped in Afghanistan along with his American colleague in 2016, is intending to return to the country and serve its people under the Taliban.

The longest-held captive in Afghanistan’s four-decade-long conflict, he spent 1,192 days (more than three years) in Taliban custody along with his American colleague, before they were swapped with the US in exchange of three Taliban leaders.

In an exclusive interview with Anadolu Agency, Weeks, who converted to Islam in the second year of his captivity and prefers to be called by his new name Jibra’il Omar, said he is planning to team up former Afghan parliamentarian Soona Barakzai, currently in Australia to set up a charity for Afghanistan.

He is also encouraging the minority Sikh community to return to their homeland, who had escaped fearing for their lives after the Taliban take over.

“Inclusivity is happening gradually in the country,” said Weeks, while referring to a recent meeting between former Afghan Sikh MP Narendra Singh Khalsa and Taliban leaders.

Jibra’il said he had contacted Khalsa, and arranged his meeting with Sirajuddin Haqqani, the acting interior minister in the interim Taliban-led government.

Although he was tortured by the Taliban during his three-year captivity, the Australian teacher wants to help the new rulers and promote education in the country.

“Once I was listening to children’s voices through a small window in one of the cells, and as a teacher, I adored them. This was the moment of my gradual shift, and I decided to help the people after my release,” he said, adding that “Afghan children deserve an education and a better life.”

While negotiating with his reflexes and eating food slowly, he pleaded with the world, to understand the Taliban and give them time, as they gave to guerillas, who after decades of fighting became rulers in East Timor, a Southeast Asian nation dominated by Christians.

“I ask the world to understand the Taliban and give them time, just like they gave to guerillas who became rulers in East Timor,” said Weeks, who was in Ankara.

Recalling the dreadful day, when he was kidnapped, Weeks or Jibra’il stated that on Aug. 9, 2016, on his way back to home, after finishing teaching Afghan police officers at the American University at 8 p.m. local time, the van in which he was traveling was intercepted just outside the university.

“I was still trying to sort out things in my bag that vehicle came to a stop and my head was smacked against the front seat’s steel bar. When I regained consciousness, I found himself and my American colleague Kevin King being guarded by four armed kidnappers dressed in military fatigues,” he said.

Tall and thin Weeks had lost 14 kilograms of weight and soon after his release was diagnosed with advanced-stage prostate cancer and has undergone 11 surgeries in the past 10 months. During the captivity, the Taliban moved him 33 times and many times avoided death by a whisker.

He said the best moment in his life was when he was swapped in the southern Afghan province of Zabul on Nov. 19, 2019, in exchange for two Taliban leaders. The group that had tortured and banged his head on the steel bar hugged him and pledged to stay in touch before he boarded one of two US Black Hawk helicopters that had landed to take him home.

Keeping the commitment, he continued to keep in contact with the Taliban.

“I am now Afghan and (ethnic) Pashtun, and if given the chance, I will get a passport,” he said.

Showing his Australian passport, where he has changed his name to Baar Muad Jibra’il, he said he will return to Afghanistan in three months to help the people.

“I adore them because they deserve,” he told Anadolu Agency.

He said in the second year of his captivity possibly in Gazni province, he had begun to find the answer to the question as to why he is alive.

“I also had that hope of attaining freedom, and aside from that, in solitary confinement, I was thinking that there is someone who is keeping me alive and that someone is Allah,” he said, adding that he also felt that angel Jibra’il standing near and talking to him.

It coincided with a Taliban security guard Omar treating him very well and offering several books on Islam in the English language as well as serving him a better food.

“Even after I converted to Islam and began praying five times a day, one of the Taliban guards used to beat him up a lot,” he added.

Jibra’il said the Taliban’s calmness even at worst times when bombs were raining and their tenacity to fight impressed him.

An avid traveler, he had spent 20 years as an English language teacher in Thailand, Saudi Arabia, UAE, Palestine, Azerbaijan, Hong Kong, and Timor Leste after completing his post-graduate degree in education from Cambridge University, UK.

Unlike many such captives, who lost count of days, Jibra’il had kept track of days, months, and years.

“I recall the date and time when we were relocated from one cell to another. I wrote them all shortly after my release,” he said.

He is now working on a book to detail his captive life in Taliban custody and hopes to complete the project in the next three months.

Jibra’il said once US forces were seconds away from rescuing him and his American colleague in Ghazni.

“The Taliban dragged them into a tunnel with a 40-degree slant and a depth of several feet amid the fierce fire. There was another tunnel down where we were imprisoned for days. We could feel the earth shaking with the impact of bombs,” he added.

His colleague Kevin was old and overweight, with a slew of health issues, including walking difficulties that made moving from one detention cell to another difficult. Jibra’il also developed health issues that included feet wounds, skin diseases, and scurvy – a vitamin C deficiency.

He claimed that one of the places they took them reminded him of Switzerland with its beautiful mountains and tiny villages, winding roads, and incredible snowfall.

“I later looked up the pictures and they look like Pakistani area of Waziristan,” he said.

Pakistan began fencing its 2,670 kilometers (1,660 miles) international border with Afghanistan in March 2017 and has completed 95% of the work so far, stating that barbed wire along the border will deter terrorism, drug trafficking, and illegal immigration.

The interim Taliban administration, on the other hand, has a strong aversion to border fencing and has removed it at three separate locations since regaining power in August last year.

Asked why he chose Islam, when Islamophobia was sweeping the West and elsewhere in the world, he said it was unfortunate that Islam was portrayed as a threat rather than a religion of peace.

Referring to his country Australia, he said major media outlets have built a narrative against Muslims portraying them as suicide bombers and that all women wear the hijab and walk behind men because they are forced to and Muslim men can marry four times.

Jibra’il said after the release, his ordeal began at his home in Australia, where he was castigated for converting to Islam.

“My family is from the Hillsong Evangelistic Church. They were taken aback and feared I have gone insane. Half of my family believed that I have Stockholm syndrome as a result of my years in Taliban’s captivity,” he said.

​He was even referred to renowned psychiatrists, and they ruled out Stockholm syndrome. Some of his family members have accepted his decision, but he said it was still a challenge to educate them about Islam.

“I always wear this traditional Pashtun cap to remind myself that I am a Muslim. But people chase me down the road,” he stated, adding that “Islamophobia exists in Australia, as it does in many Western countries, including the UK and US.”

Leaving behind the dark days, he spent in Afghanistan hanging between life and death, Jibra’il is advocating peace and engagement with the Taliban. He has 18,000 followers on social media and focuses on highlighting Afghan issues.

On his visit to Turkiye, he said besides vacation, he wanted to raise the issue of Afghan refugees.

“No doubt, Turkiye has been hit hard by the refugee crisis and that is difficult. And it is not getting the support it needs,” he added.

“I request the international community to refrain from entering these countries and creating a mess. Instead, fix your problems, as different systems in developed countries, including the US are failing,” he said.

The Afghan war began in 1979 with the invasion of the former Soviet Union and lasted until 2021, including a factional fight between Mujahideen groups after Soviet troops withdrew in 1989. Taliban emerged to end this factional feud in 1996 under Mullah Omar’s leadership and ruled the country until they were ousted by US forces in October 2001.

According to the UN, more than 150,000 people have been killed in the last 20-year conflict, many of them civilians.

Millions of people have become refugees as a result of the 42-year conflict, with the majority living in Pakistan, Iran, and Turkiye.

Poetry is solace in captivity

Jibra’il also recounted his meeting with Anas Haqqani, a Taliban leader who, along with two other commanders, was swapped in exchange for his and King’s freedom.

Last year in October Taliban had invited him to visit Doha, where they were having face-to-face talks with the US. Anas, the younger brother of Sirajuddin Haqqani, met him at the airport.

“We spent the entire day talking about our incarceration and tortures. We have one thing in common… we both began writing poems during our incarceration. During my captivity, I have written 33 poems,” he said, adding that poetry is the best way to express one’s emotions and deal with difficult situations.

Saudi airstrikes in Yemen down 80% in 2 weeks: UN envoy