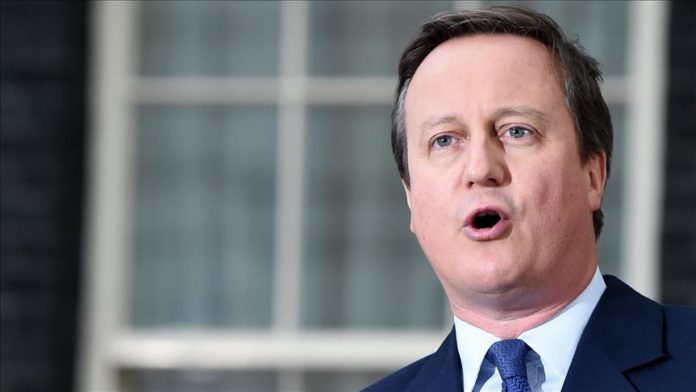 Cameron’s intervention this morning makes him the fifth and final living prime minister to condemn the UK Internal Market Bill.

Cameron said: “Passing an Act of Parliament and then going on to break an international treaty obligation is the very, very last thing you should contemplate.

“It should be an absolute final resort. So I do have misgivings about what’s being proposed.”

The British government has publicly admitted that its UK Internal Market Bill will break international law. The bill will unilaterally override key aspects of the UK’s Brexit agreement with the EU, specifically the Northern Ireland protocol.

The government argues this is necessary to ensure unrestricted access for goods from Northern Ireland to the rest of the UK.

However, the deal Johnson now seeks to unilaterally override is the one he himself negotiated, campaigned on the basis of at the last general election in 2019, and signed in January.

Northern Ireland Secretary Brandon Lewis told the parliament last week: “Yes, this does break international law in a very specific and limited way. We’re taking the powers of this to apply the EU law concept of direct effect… in a certain very tightly defined circumstance.”

“Certain provisions to have effect notwithstanding inconsistency or incompatibility with international or other domestic law,” the draft bill read.

The bill includes a section with sweeping exemptions, saying it overrides “any other legislation, convention or rule of international or domestic law whatsoever, including any order, judgement or decision of the Europe Court or of any other court or tribunal.”

“Of course the bigger picture here is we are in a vital negotiation with the EU to get a deal and I think we have to keep that context, that big prize in mind, and that’s why I’ve perhaps held back from saying more up to now.”

Rehman Chishti, a member of the ruling Conservative Party, also resigned as the prime minister’s special envoy for freedom of religion or belief.

He tweeted: “I’ve written to the PM resigning as PM’s Special Envoy on FoRB [freedom of religion or belief]. I can’t support Internal Market Bill in its current form, which unilaterally break UK’s legal commitments. As an MP for 10yrs & former Barrister, values of respecting rule of law & honouring one’s word are dear to me.”

In his resignation letter to Johnson that was attached to his tweet, he wrote: “During my 10 years in parliament and before that as a barrister, I have always acted in a manner which respects the rule of law. I feel strongly about keeping the commitments we make; if we give our word, then we must honour it.”

In an article in the Times, he wrote: “It is unconscionable that this country, justly famous for its regard for the rule of law around the world, should act in such a way.”

“No British minister should solemnly undertake to observe treaty obligations with his fingers crossed behind his back,” Cox added.