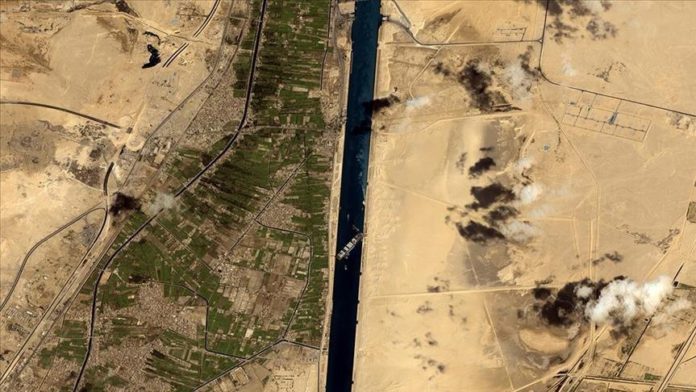 The Panama-flagged ship Ever Given set sail towards the northeastern Egyptian city of Ismailia on Wednesday for its departure from the Suez Canal and resumption of its voyage to the Dutch city of Rotterdam.

Live footage aired by Egyptian media outlets broadcast the moment the ship moved and settled in the middle of the shipping lane, heading north after 107 days of being held by local authorities.

The Suez Canal Authority said in a statement that it would hold a ceremony and press conference later in the day to sign the settlement agreement with the company that owns the ship.

Following a deal between the company and canal authorities, an Egyptian court on Tuesday ordered the release of the container ship that blocked the Suez Canal in March for nearly a week as it was stuck in its banks, local media reported.

On Sunday, UK Club, the company that insures the Ever Given, announced that it had reached a formal solution with the Suez Canal Authority (SCA).

“Preparations for the release of the vessel will be made and an event marking the agreement will be held at the authority’s headquarters in Ismailia in due course,” UK Club said in a statement.

It also noted that the two sides agreed for the negotiation details “remain confidential.”

The accident blocked international trade in one of the world’s main waterways with more than 320 ships, including oil tankers, stuck at the entrances of the canal, sparking a crisis in the world supply chain, especially in Europe.

It took six days of joint efforts to pull the stuck ship loose and successfully refloat it.

The canal authority initially demanded $916.6 million in compensation but later lowered this to $550 million.