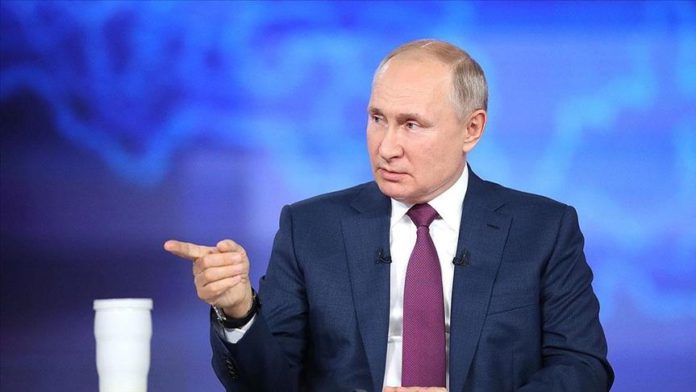 Russian President Vladimir Putin said on Wednesday that even if Russian forces sank the British destroyer, it would not have started a new world war because the Western powers know they could not win such a war.

The Russian president called the last week’s incident with the British Royal Navy destroyer in the Black Sea “a provocation” prepared jointly by London and Washington for reconnaissance purposes.

Apart from the British destroyer Defender, a US reconnaissance plane took part in the incident, Putin said, speaking at an annual Direct Line TV program.

The destroyer entered the Russian territorial waters at noon while in the morning, Russian radars detected a US reconnaissance plane that took off from Greece, he said.

Both the plane and the destroyer acted jointly to find out how the Russian military acts in such situations, what protocols will be engaged, then the Russian armed forces noticed that and showed what they considered appropriate to show, the president said.

“It was obvious that the destroyer came in, first of all, pursuing military goals, trying with the help of a reconnaissance aircraft to reveal what actions our armed forces will use to stop such provocations, they looked at what was turned on, how it works, where it is located.

“We saw this and knew it, so we gave such information as we considered necessary,” Putin said, adding: “I apologize to the military. I hope I didn’t divulge any sensitive information.”

But Putin did not agree that the world was on the brink of a World War III, saying a war would not have started even if Russia had sunk the British destroyer “because those who do this know that they cannot emerge victorious from this war.”

The Russian president pointed out that Russia stopped its military exercises near Ukraine’s border to remove concerns of the Western countries, but in response, they moved the armed forces to the Russian borders, he said.

“They made a big fuss about the fact that we conducted exercises on our territory near the Ukrainian borders. I gave instructions to the Ministry of Defense to slowly finish and withdraw the troops if someone is so worried about it. We did it. But instead of reacting to it positively and saying: ‘Okay, we understand your reaction to our indignation,’ what did they do? They have come to our borders,” Putin noted.

Putin raised the alarm over Ukraine’s cooperation with NATO and the West, saying “military taking over of Ukraine’s territory” creates serious problems for Russia.

“The military taking over of the territory that directly borders us creates significant security problems. This concerns the real-life interests of the Russian Federation and the people of Russia. This is what causes concern,” he said.

Putin slammed the actions of the Ukrainian President Volodymyr Zelensky who “ceded the country to the external control” of Washington, and partly Berlin and Paris.

But he said he could meet with Zelensky to discuss the existing problems.

On June 23, the Russian Defense Ministry said the country’s border guards stopped a British Royal Navy destroyer — HMS Defender — that Russia said was violating its waters, did not respond to warnings of the Russian coastal forces, and only turned back when warning shots were fired.