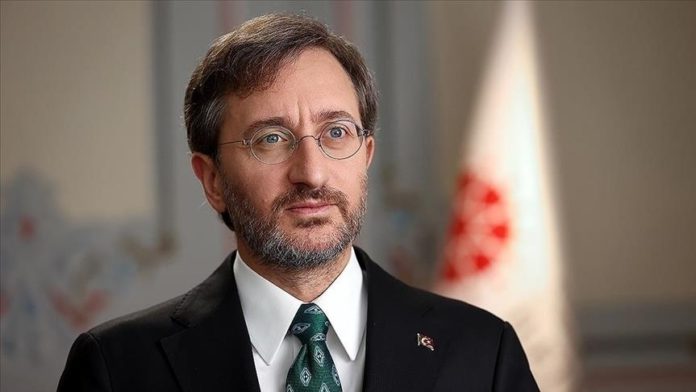 Presidency’s Director of Communications Fahrettin Altun made these remarks in response to a question on Europe’s stance during and after July 15, 2016, Turkish-EU and Turkish- Greek relations, in an exclusive interview with Spanish daily El Mundo on the 5th anniversary of the FETO’s defeated coup attempt.

Altun noted that the defeated coup attempt was the latest handiwork of the FETO terror group, which had previously failed in its efforts to take over the country, and that President Recep Tayyip Erdogan’s determination was crucial in the defeat of the coup attempt and the nation’s overall fight against the terror group.

In response to a question from the newspaper about claims that the coup attempt was staged by the Turkish government, Altun said such allegations have something to do with the rise of Islamophobia in Europe.

“Recently, in Europe, an obsession with President Erdogan emerged. Anything related to Turkey is interpreted through him. And unfortunately, as a natural consequence of this state of affairs and obsession with Erdogan, any kind of disinformation about Turkey finds audience,” he said.

This argument is identical to accusations that September 11 was carried out by the American deep state or that the ETA (terrorist group) was founded by the Spanish government, Altun remarked.

He emphasized the existence of a myriad of confessor statements, witness testimonies, and an immense volume of pictures and videos proving FETO’s direct and strong involvement in the July 15 defeated coup attempt, saying Turkey will continue to reveal the truth in the face of those who seek to hide the truth and distort the facts.

In response to a question on whether Turkey perceived a lack of sympathy from the EU in the aftermath of the defeated coup attempt, Altun explained that the EU could not comprehend how all political parties in Turkey agree on the magnitude of the FETO threat and how the coup attempt traumatized the Turkish people.

Considering that the Turkish parliament was bombed, hundreds of people were killed and terrorists attempted to assassinate the president, the EU’s response is frustrating, he reiterated.

“The tolerance shown to FETO members who were directly involved in the (failed) coup attempt conveys the impression to Turkish people that EU sympathizes with putschists or cooperates with them. Europe’s tolerance of the FETO terror group also overshadows its own discourse on human rights, democracy,” he said.

Turkey marks June 15 as Democracy and National Unity Day with nationwide ceremonies to honor those who lost their lives fighting putschists and to remember the nation’s bravery.

Regarding the current state of Turkish-EU relations, Altun said the EU has to better appreciate and understand Turkey’s role in the fight against irregular migration, regional peace and security, and terrorism.

He, however, praised Spain’s constructive and positive policy toward Turkey, saying that Madrid is one of the few countries that truly understands Ankara.

Spain was among the countries that helped de-escalate tensions in the Eastern Mediterranean, Altun added.

About Turkish-Greek relations, Altun noted that Turkey believes that issues between the two countries should be resolved according to international law and wants to see the Mediterranean as a peaceful basin.

Nonetheless, he said a long-term solution is not achievable through maximalist demands (from Greece).

Turkey, which has the longest continental coastline in the Eastern Mediterranean, has rejected maritime boundary claims of Greece and the Greek Cypriot administration and stressed that the excessive claims violate the sovereign rights of both Turkey and the Turkish Cypriots.