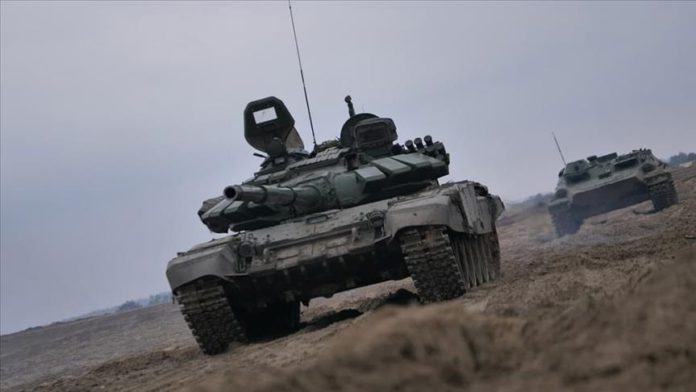 “We will respond to this breach of international law & coordinate with our partners,” Baerbock said on Twitter.

“It is an act of aggression against Ukraine that must be met with unequivocal response & immediate sanctions. It is the only language Putin understands,” Morawiecki said, calling for an urgent meeting of the European Council to discuss the matter.

“This is a further violation of #Ukraine’s sovereignty and territorial integrity and directly contradicts the spirit and the letter of the Minsk agreements,” it added.

“In a gross violation of international law, under a fabricated pretext, and by spreading false information, Russia seeks to induce a change in Ukraine’s political leadership and foreign policy course by violent means,” said a statement by the Latvian Foreign Ministry.

“Putin just put Kafka & Orwell to shame: no limits to dictator’s imagination, no lows too low, no lies too blatant, no red lines too red to cross. What we witnessed tonight might seem surreal for democratic world. But the way we respond will define us for the generations to come,” Lithuanian Prime Minister Ingrida Simonyte said on Twitter.

Calling on Russia to de-escalate tensions in the region, Estonia urged the European Union to impose strict sanctions immediately.

“If the decision will be made by Russia to recognise so-called ‘Donetsk & Luhansk People’s Republics,’ it would constitute a grave violation of int´l law & of Ukraine’s sovereignty & territorial integrity,” the Estonian Foreign Ministry said on Twitter.

Putin officially recognized Ukraine’s Donetsk and Luhansk regions as independent states and signed the relevant agreements with the rebel leaders of the regions in the Kremlin.

He also said he would ask the Russian parliament “to immediately recognize” the signed agreements as valid.

He also demanded that Kyiv “halt hostilities in the Donbas region immediately,” saying that if not, “the responsibility for what happens” will lie with the country’s authorities.

The EU’s top officials condemned the recognition of Luhansk and Donetsk by Russia, calling it a “blatant violation of international law.”

In a joint statement, European Council President Charles Michel and European Commission President Ursula von der Leyen condemned “in the strongest possible terms the decision by the Russian President to proceed with the recognition of the non-government controlled areas of Donetsk and Luhansk oblasts of Ukraine as independent entities.”