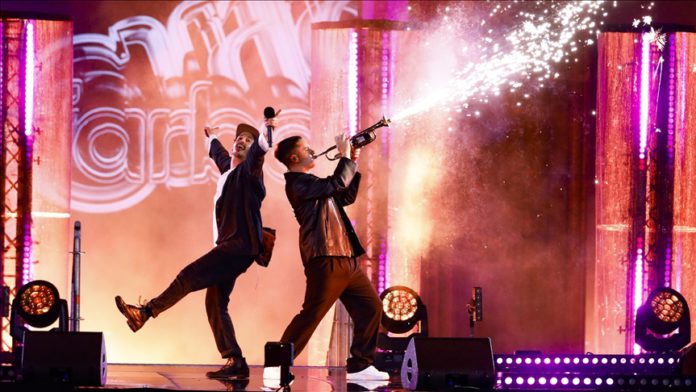 Europe welcomed the New Year on Saturday under reimposed restrictions against the spread of the omicron variant of the coronavirus.

As large-scale outdoor events with participants could not take place across Europe, residents had to do with watching live performances and firework shows on television.

For a second straight year, celebrations in Germany’s Brandenburg Gate, a symbolic location where more than 100,000 people gather annually to mark the end of the year, were not held.

A televised concert by public broadcaster ZDF was organized.

Fireworks were banned in Germany that has begun to reimplement contact restrictions due to the spread of the variant.

The Dutch government also banned the sale of fireworks and entertainment shows as part of restrictions.

Those who could not acquire products in the Netherlands bought fireworks from neighboring countries such as Belgium.

Although police attempted to prevent the illegal entry of fireworks, they were launched across the country.

In Sweden, which follows the strategy of “herd immunity” against COVID-19, firework shows were held without observing social distance.

Hundreds joined an event in central Stockholm while dozens of police and ambulance vehicles stood ready in case of possible injuries. Participants watching the show did not wear masks.

The pandemic also cast a shadow on celebrations in the UK as events in London’s Trafalgar Square were canceled and entries were denied.

But fireworks, which were initially banned but then allowed, were launched around the Thames River.

Prime Minister Boris Johnson said the country was in a much better position than last year thanks to vaccinations.