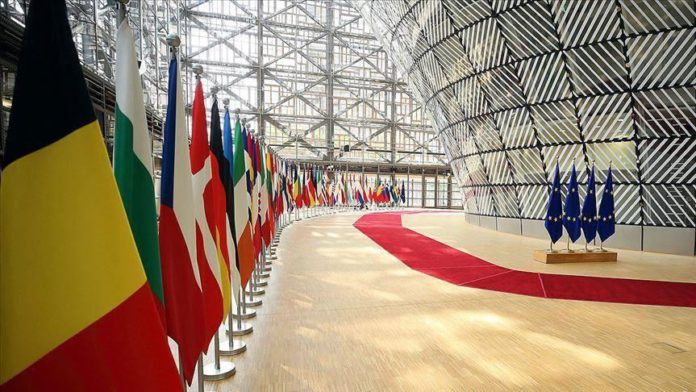 Encouraged by US President Donald Trump’s so-called “Deal of the Century,” Israeli Prime Minister Benjamin Netanyahu last month announced his government would formally annex the Jordan Valley and all settlement blocs in the West Bank.

The annexation was scheduled to be declared by Netanyahu on Wednesday.

But uncertainty surrounds Netanyahu’s position in light of widespread international criticism of the plan along with differences with the US on its application.

Annexation “will certainly happen in July,” but it has to be done in partnership with the US, Ofir Akunis, Israel’s regional cooperation minister, told Army Radio.

The annexation “will only happen after a declaration by Trump,” he added.

Like Turkey and much of the international community, the EU does not recognize Israel’s sovereignty over territories it has occupied since 1967.

Foreign Minister Heiko Maas warned that the Israeli move would threaten the stability of the entire Middle East.

He vowed to put the issue on top of the agenda as Berlin assumed a six-month rotating European Union presidency as well as head of the monthlong UN Security Council.

Maas urged Israel to reconsider its plans, saying it was still possible to use “the opportunity and the time window” before a likely annexation.

Prime Minister Boris Johnson said the UK would “not recognize any changes” to Israel’s borders set in 1967 unless also agreed to by the Palestinians.

In an article penned for Israeli newspaper, Yedioth Ahronoth, Johnson warned Israel, urging an “outcome that delivers justice for both Israelis and Palestinians.”

Johnson argued the proposed annexation “would put in jeopardy the progress that Israel has made in improving relationships with the Arab and Muslim world,” adding that Israel’s interests “overlap” with Arab partners.

“But however strong their interest in a different kind of relationship with Israel, annexation would inevitably set back these opportunities and constrain potential Arab partners,” Johnson said.

Expressing the pride of the UK’s “contribution to the birth of Israel with the 1917 Balfour Declaration,” he said it would remain “unfinished business until there is a solution which provides justice and lasting peace for both Israelis and Palestinians.”

“The only way it can be achieved is for both sides to return to the negotiating table,” he said. “That must be our goal. Annexation would only take us further away from it.”

The Belgian parliament adopted a resolution June 26 that urged the government to prepare a list of countermeasures against Israel in case it annexes occupied Palestinian territories.

The resolution was proposed by the Green Party and passed with 101 votes in favor and 39 abstentions.

It calls the government to “play a leading role at European and multilateral level in order to set up a list of effective countermeasures to respond proportionately to any Israeli annexation of the occupied Palestinian territory.”

The resolution acknowledges that some states might veto EU sanctions. So, it suggests Belgium create a European coalition with like-minded countries.

Earlier, more than 1,000 lawmakers from across Europe condemned the West Bank annexation plan in a joint letter.

They urged European leaders to prevent the annexation, save prospects of a two-state solution and expressed support for EU foreign policy chief Josep Borrell’s previous statement that warned “annexation could not pass unchallenged.”

Speaking at the plenary session of the European Parliament June 18, Borrell said it would be a “serious violation of international law” if the Israeli government decided unilaterally to annex any parts of the West Bank.

The majority of EU member states can only accept “a negotiated two-state solution, based on international parameters.”

The EU’s recognition of Palestine as a state would become “inevitable” if Israel moves forward with its controversial plan, Luxembourg’s foreign minister told German weekly Der Spiegel on June 14.

Jean Asselborn called for a tougher EU stance against Israel’s plan to annex.

“The recognition of Palestine. This debate would gain a whole new dynamic, I would even consider it inevitable,” Asselborn said, noting such a decision would not require a unanimous decision by all 27 member states.

The Vatican said Israel’s “possible unilateral actions” can worsen the “delicate situation in the Middle East.”

Cardinal Pietro Parolin, the Vatican’s secretary of state, expressed the Holy See’s concern that such action could “further jeopardize the search for peace between Israelis and Palestinians,” according to a statement issued Wednesday.

“As already declared on 20 November 2019 and on 20 May 2020, the Holy See reiterates that the State of Israel and the State of Palestine have the right to exist and to live in peace and security, within internationally recognized borders,” it said.

Parolin emphasized the need for all sides to “reopen the process of direct negotiation … aided by measures that can reestablish reciprocal confidence.”