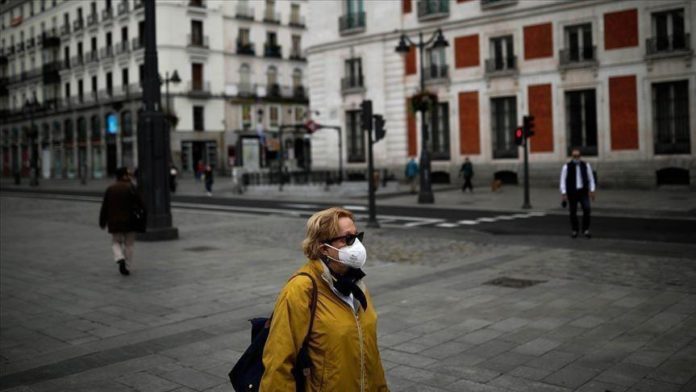 As the number of coronavirus cases continues to rise across Europe, countries introduced plans to stem the spread of the virus.

European Union, on the other hand, urged citizens to stay vigilant and cautious during winter, especially around the holiday season at the end of 2020.

France, having the highest number of COVID-19 cases with more than 2.27 million, announced a gradual exit strategy from lockdown last month.

On Nov. 28, lockdowns started to loosen with the opening of shops that had been considered non-essential, but only until 9:00 p.m. local time (2000GMT). Religious services resumed, albeit with a 30-person limit.

However, lockdown will be lifted on Dec. 15, but a curfew will be imposed from 9:00 p.m. to 7:00 a.m. excluding Christmas Eve and New Year’s Eve. Museums, theaters, movie houses, conservatories, and music schools will reopen.

In Spain, from Dec. 23 to Jan. 6, people will not be allowed to leave their regions except for reasons like work or family visits, which will be loosely defined and not limited to legal ties.

On Christmas Eve, Christmas Day, New Year’s Eve, and New Year’s Day, gatherings of up to 10 people will be allowed. At the moment, most Spanish regions have limited gatherings to a maximum of six people.

Spain has so far reported more than 1.66 million virus cases and 45,784 deaths, according to the US-based Johns Hopkins University (JHU) data.

Being the epicenter of the virus during the first wave, Italy announced measures for the Christmas holiday in a bid to prevent a third wave of the pandemic next year.

The new rules — which will be effective as of Dec. 4 — will include an almost total ban on international movements and between Italian regions.

The restriction will be even tougher on Dec. 25-26 and Jan. 1, when citizens would not be allowed to travel even between cities.

The death toll from the virus in the country reached 57,045 with more than 1.64 million cases since the start of the pandemic.

The UK government allows people to spend Christmas together for up to three households to form a “Christmas bubble” between Dec. 23-27.

There is no fixed number of people to join the bubble but authorities warned to keep it as small as possible.

Families will be allowed to meet at each other’s homes, places of worship, or outdoor spaces.

England on the other hand exited from lockdown on Wednesday and entered a strict three-tier system.

Many shops, restaurants, pubs, and cafes, as well as gyms, opened their doors for the public on Wednesday in zones marked Tier 1 or 2.

The government is expected to review the situation and tier zones in mid-December before the start of the holiday season.

The UK has so far reported over 1.66 million cases and 59,796 deaths since the start of the pandemic.

German Chancellor Angela Merkel has said the ongoing partial lockdown in the country will not be lifted until Jan. 10.

However, Germans will have a brief relief over Christmas, as people from one household will be allowed to meet up to 10 people from other households between Dec. 23-Jan. 1.

Authorities advised citizens to self-isolate prior to holidays and asked employers to show flexibility around Christmas for allowing people to work from home.

Germany has reported a total of 1.11 million cases but the death toll in the country remains lower than other worst-hit European nations with 17,659 deaths.

Poland on Wednesday became the sixth country with the highest number of cases in Europe, after France, Spain, the UK, Italy, and Germany.

The total number of coronavirus cases in Poland topped the 1 million mark with 13,855 new cases reported on Wednesday. The death toll in the country reached 18,208.

Despite strict safety measures enforced last month in the country, the number of cases and fatalities have surged in recent days.

Across the country, working hours of public places such as shopping malls, hotels, cinemas, and museums have been limited, while restaurants and cafes are only allowed to provide delivery services.