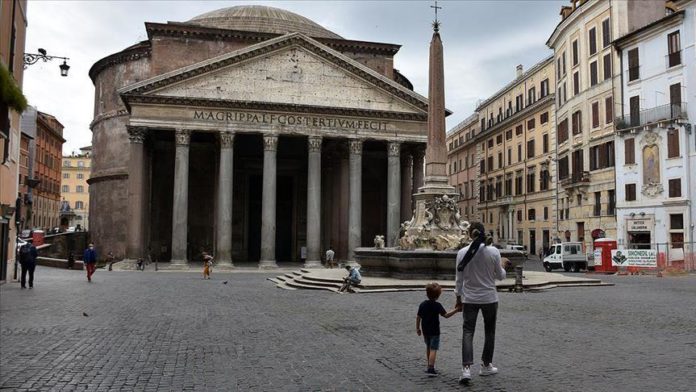 Dropping number of COVID-19 cases and daily deaths prompt Europe to reopen businesses and revive social life after battling the virus for more than two months.

The UK started easing lockdown restrictions as of Monday, those who cannot work from home start commuting with measures such as social distancing and wearing masks in the trains.

After two months of strict lockdown, citizens and businesses restarted a more regular life, as restaurants, bars and shops reopened their doors in Italy too.

As of Monday, several Spanish regions, including Valencia and Malaga, can now open small shops and outdoor bar and restaurant terraces. Groups of up to 10 people may also gather in public or private spaces.

France has been open since last week after nearly two months of lockdown.

The UK is one of the worst-hit countries in Europe from the novel coronavirus with 34,796 deaths and 246,406 confirmed cases as health authorities announced Monday.

But the UK government encouraged workers in England who cannot work from home to travel to work as rail operators began to run more trains on Monday.

Services increased from 50% of the normal timetable to 70%, but capacity will be reduced to 10% of normal levels.

This is to ensure social distancing. Passengers are also being urged to wear face masks and avoid non-essential travel.

Even with these measures in place, unions are wary of the speed with which the government is lifting the lockdown and the impact it may have on workers.

Mick Cash, the general secretary of the National Union of Rail, Maritime, and Transport, said: “We are opposed to the early relaxation of lockdown measures and believe that non-essential workers should avoid using trains. When people absolutely must use a train, there should be new compulsory protections.”

Italy on Monday reported 99 more fatalities from the novel coronavirus, bringing the death toll to 32,007 with the lowest rise since the first phase of the contagion in early March.

After two months of strict lockdown, citizens and businesses restarted a more regular life, as restaurants, bars and shops reopened their doors.

Prime Minister Giuseppe Conte explained that the new, softer rules can be changed again if the curve of contagions show a new rise.

“We are facing a calculated risk. I have to admit, very clearly, that the curve could go up again,” the premier said on Saturday.

Conte stressed the lockdown rules will be relaxed gradually to avoid a second wave of contagions.

Restaurants have to ensure a distance of at least 1 meter (3.2 feet) between customers who will be obliged to make reservations. Business owners are also requested to keep records of the reservations for at least two weeks to help track possible infections.

Hairdressers and beauty salons have to start taking reservations and must ensure strict sanitary measures.

Much of Spain relaxed lockdown measures on Monday as the country reported the fewest daily deaths since mid-March.

The Health Ministry registered 59 more COVID-19 fatalities on Monday — the lowest daily number in more than two months. It is also the second day in a row that Spain counted less than 100 deaths from the disease.

Approximately 70% of Spain’s population is now in this scenario.

Although Madrid and Barcelona remain in the first of four phases, some small shops in the major cities are now able to open to the public. Terraces remain closed and social gatherings are still banned.

Prime Minister Pedro Sanchez will ask the parliament to extend the country’s state of emergency until late June this week.

France started easing lockdown measures on May 11 but the government officials warn public for being cautious to avoid a second wave of infection.

The lifting of lockdown, however, does not mean total freedom of movement.

The French government has drawn up a map that has divided the country into two zones — green for low-risk and red for high-risk. Paris and Ile-de-France, along with northeastern France, are in the red zone.

Gatherings of more than 10 people are still forbidden nationwide, with bars, cafes, restaurants, hotels, and cinemas shut until early June.

Belgium entered on Monday into the second phase of reopening the economy after the coronavirus lockdown.

Children have returned to schools, hairdressers and beauticians have reopened their businesses, and museums, zoos, and libraries welcomed visitors for the first time since the federal government imposed strict restrictions on public life on March 18.

But it is mandatory to follow social distancing rules to prevent a second wave of the pandemic.

Restaurants and bars can only return to normal service on June 8, but the plan needs to be confirmed by the government. It is still unclear when the public can attend cultural events or sports clubs.

Nationwide more than 55,559 people have been infected by the virus, and 9,080 victims lost their lives to COVID-19.

The Netherlands on Monday reported 14 new COVID-19-related fatalities, bringing the country’s toll to 5,694.

Confirmed coronavirus cases rose by 146, and the total infections now stand at 44,141, according to the latest data by National Institute for Public Health and the Environment (RIVM).

“The figures are in line with the impression that the measures are working,” the RIVM said in its daily update.

The lifting of measures began on May 11, and will be expanded in stages through September.

Elementary schools, hairdressers and libraries have reopened while restaurants, cafes, cinemas, and cultural institutions will conditionally resume operations from June 1.

A maximum of 30 people, including staff, will be allowed at a time, and only if visitors are able to keep a distance of 1.5 meters (nearly 5 feet) from others.

Restrictions will be further eased between June 15 and Sept. 1.

Citizens have been advised to maintain hygiene, avoid busy places, and stay at home if they are sick.

In early May, Germany eased coronavirus lockdown measures by gradually reopening schools and shops, and this week, restaurants and cafes were also allowed reopen in most of the federal states.

Large gatherings in public are still prohibited and until June 5, only members of two separate households are allowed to meet outside provided that they maintain physical distance.

The federal government urged caution despite a decline in new infections, recommending people to wear cloth face masks in public and keep a distance of at least 1.5 meters from others.

On Monday, Germany reported the fewest daily deaths from coronavirus since mid-March.

Germany relaxed border controls with France, Austria and Switzerland last weekend, and the Interior Ministry announced that its goal is to completely end border controls on June 15, depending on the evolution of the epidemiological situation.

Movement restricted in 2 Kashmir districts due to virus