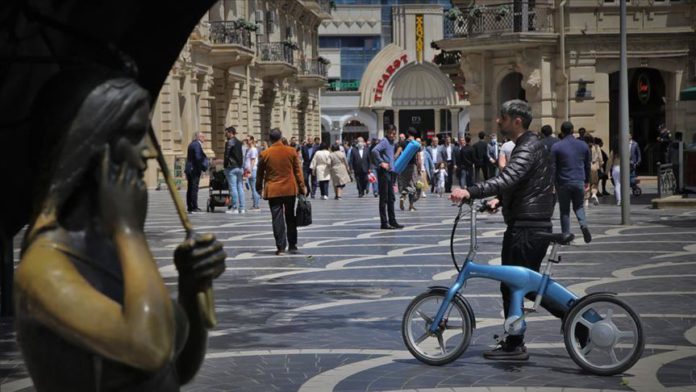 Health authorities in Eurasian and Central Asian countries on Tuesday reported new infections and fatalities related to the new coronavirus.

The death toll in Ukraine reached 4,520 with 90 more fatalities reported over the past 24 hours, Health Minister Maksym Stepanov said.

A quarantine in Ukraine has been extended until Nov. 1, with the practice of dividing the regions into green, yellow, orange and red zones continuing. The situation in the regions is determined according to the number of tests conducted, bed occupancy rate, and the rate of cases.

The number of daily cases in the country, which was below 700 in April and May, increased to over 1000 towards the end of June, then decreased.

The number of cases started to rise again at the beginning of August. Last week, a record 4,661 people contracted the virus.

The case count in Georgia grew to 9,286 with 549 new cases over the past 24 hours, the Prime Ministry said in a statement. The death toll reached 58 with six more fatalities.

A total of 4,887 patients have beaten the virus with 268 new recoveries in the country, while 5,392 people are still under quarantine.

The epidemic is widespread in the Ajaria region. Over 398 new cases were recorded in the region, while the number of new cases in the capital Tbilisi was 99.

New cases in the country have increased since the beginning of September, with a record 578 cases on Oct. 5.

The number of daily cases recorded in Georgia was below 40 in March and April. It declined to less than 10 in July, but started to increase rapidly at the end of August.

With 251 new infections, Uzbekistan’s case tally rose to 59,197. Two more fatalities raised the death toll to 484, while recoveries increased to 55,751, according to the Health Ministry.

It also said 94% of the patients who contracted the virus have recovered.

The treatment of 2,959 patients continues in hospitals. Quarantine measures in Uzbekistan have been gradually lifted since Aug. 15. After ease in restrictions, the number of daily cases increased in September and reached over 700 on Sep. 10.

In Kazakhstan, 60 new infections raised the overall count to 108,296 over the past 24 hours, according to the Health Ministry.

The treatment of 3,180 coronavirus patients, including 70 children, continues in the country.

The number of pneumonia cases with symptoms of COVID-19, but negative for the virus, increased by seven to reach 33,615 in the country.

A decree on the implementation of new rules in international flights, signed on Oct. 3 by country’s medical chief Yerlan Kiyasov, came into effect as of today.

Under the decree, foreigners coming to Kazakhstan by airway will not be allowed to board a plane without a document showing that the COVID-19 test results taken within 72 hours before entering the country are negative.

Diplomats, members of official delegations, and representatives of international organizations accredited in Kazakhstan are not subject to this restriction, but they will be tested in their places of residence.

On the other hand, Kazakhstan citizens returning from abroad by airway will also be tested.

Kyrgyzstan’s Health Ministry confirmed that 164 people were diagnosed with the virus over the past 24 hours, bringing the total number of cases to 47,799.

The ministry said the number of people recovered from the virus reached 43,644 with another 123 recoveries.

In the country, 1,066 have lost their lives to the coronavirus, while over 2,000 patients are in treatment.