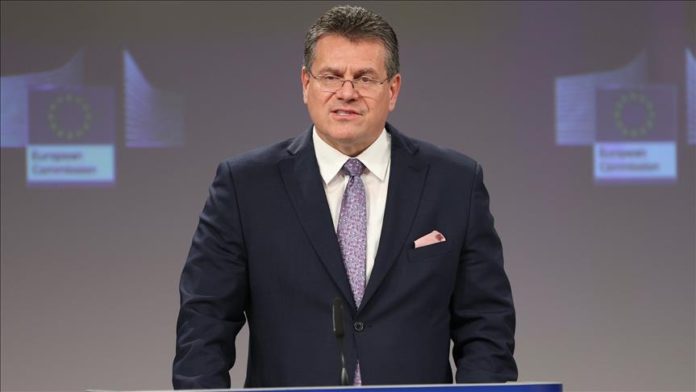 The row between the UK and EU over the Northern Ireland Protocol continued on Wednesday, with top officials from both sides digging in their positions.

European Commission Vice-President Maros Sefcovic said the bloc was “ready to seek creative solutions” but that this can only be done within the framework of the existing protocol.

Sefcovic’s response came hours after David Frost, the UK’s Brexit minister, said “we cannot go on as we are” as the protocol is causing economic and social damage.

Speaking at the House of Lords, Frost said there is a “growing sense in Northern Ireland we have not found the right balance, seen in an ongoing febrile political climate, protests, and regrettable instances of occasional disorder.”

Frost said that the burdens imposed by the protocol “have been a source of considerable and ongoing disruption to lives and livelihoods.”

‘Could seek creative solutions within the protocol’

But Sefcovic said the bloc will “not agree to a renegotiation of the protocol.”

“We will continue to engage with the UK, also on the suggestions made today,” he said.

“We are ready to continue to seek creative solutions, within the framework of the protocol, in the interest of all communities in Northern Ireland. However, we will not agree to a renegotiation of the protocol.”

“We must prioritize stability and predictability in Northern Ireland,” Sefcovic said.

“I look forward to speaking to Lord Frost soon,” he added.

The protocol, signed by the UK and EU last December to avoid a post-Brexit hard border on the island of Ireland, aligns Northern Ireland with the EU economically.

Unionists in Northern Ireland argue that the protocol created a sea border between the region and Great Britain.

Street protests by unionists in recent months injured dozens of police officers with missiles and petrol bombs. A public bus and some cars were burned down during the rallies.

Northern Ireland is remembered for its decades-long sectarian violence and terrorism, which cost the lives of thousands until around 23 years ago.

The Troubles – an era of conflict between the British government and pro-British paramilitaries on one side and Irish Republicans and nationalists on the other – ended in 1998 when the Belfast Agreement put an end to decades of armed struggle in the divided UK region of Northern Ireland.

The UK and the Republic of Ireland signed the deal, brokered by the US and eight political parties in Northern Ireland, on April 10, 1998.

The deal, dubbed the Good Friday Agreement, largely saw the end of the Troubles-era violence, in which more than 3,500 people lost their lives.

George Floyd protests continue in US for sixth day